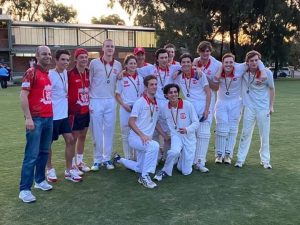 THE MIRACLE on Grass had nothing on the ending of the Under 18 Grand Final.

Many in the Warrandyte cricketing fraternity will remember where they were on the final ball of the day, when Halley Simpson’s straight drive brought up the game-winning four and a maiden Under 18s Premiership.

A non-result would see first-placed Nunawading take the title and with rain forecast for day two of the fixture it was win or go home.

The feisty Box Hill Reporter decider had it all.

A screamer from behind the stumps, a smashed car windshield, an extraordinary batting collapse and a nerve-rattled Warrandyte crowd.

The visitors were handed the pink kookaburra in the twilight match to get the game underway.

Giant-killers strike hard with the ball

Co-captains Brady Poole and Chris Rakuscek took the new ball and were faced with locking down Nunawading’s star batsman; a player who, until the Grand Final, had averaged 107 for the season.

On the sixth ball of his first over, he had Nunawading’s star player out for a duck, trapped LBW to get the innings off to a flyer.

Valuable wicket would be understating it.

The score-line quickly read 2/11 after Rakuscek joined in to claim his first of the day, caught behind by wicket-keeper Flynn Whetters.

Nunawading recovered with a 58-run partnership in the middle overs, but this would be the bulk of their runs for the innings as Warrandyte’s bowlers began to up the carnage.

Tom Jackson rolled in and ripped the partnership in two, taking the wickets of both batsman very quickly, to wrench back the momentum.

The 22nd Over took full marks for pure bowler devastation, courtesy of Blake Haslam in the first over after drinks, one the home side would never recover from.

Ball one saw Haslam’s delivery clatter into the stumps for an immediate strike.

Three searing dot balls followed as he continued to unsettle the opposition.

Ball five caught the outside edge at pace and looked to be going well past Flynn Whetters behind the stumps — until he stuck out the glove to reel in a one-handed screamer.

Ball six also caught the edge but Whetters was able to easily drag it in for Haslam’s third wicket of the over.

Poole returned in the 23rd and claimed a crucial wicket-maiden.

Warrandyte had claimed 4/0 to send Nunawading tumbling to 8/76.

A mini tail-order resistance at the end was disrupted by Rakuscek with a sharp caught and bowled for the ninth wicket.

Blake Haslam took the honour of the 10th, finishing with a marquee performance of 4/8 and helping to bundle out the opposition for 99.

The equation was now deathly simple.

With 13 overs to bat and rain on the horizon for day two, Warrandyte would need 100 runs on the dot for Premiership glory, with their batsman allowed the license to hit.

Ice-man Simpson etches himself into the history books

The message from Warrandyte’s skippers was clear.

Harry Brown and Chris Rakuscek were charged with getting the innings underway and Brown enthusiastically swung the bat with vigour to get Warrandyte off to the perfect start — 11 runs off the first over.

Rakuscek got off the mark with three runs and Brown crunched one to the mid-on boundary before he was forced to depart after being caught.

Blake Haslam took no time settling in with a couple of boundaries before he was caught for 11 and Brady Poole signalled his intentions with a first-ball four.

At the end of the sixth over Warrandyte found themselves 2/50 with the game well and truly in the balance.

The two co-captains went to work and managed to put on a 46-run partnership.

Controversy reigned as Poole was seemingly dismissed on a no-ball and after being re-called proceeded to launch the only six of the match, a towering shot straight over the bowlers head and squarely into the windshield of Bailey Bowyers car.

Poole was eventually dismissed for 26 off 23 deliveries and with three overs to go and 22 needed, the intensity was ramped up to 100.

Max Coutts was sent in to club a few runs and managed a boundary before he was dismissed.

Rakuscek departed for an anchoring 22 off 22.

Tom Jackson received a less than enthusiastic reception to the middle and he was suddenly dismissed to reduce Warrandyte to 6/87.

Tom Heffernan came in and with no hesitation launched a valuable boundary to cow corner, but his subsequent dismissal on the second ball of the final over left the score at 7/92.

Eight runs to win, Halley Simpson and Gus Ramsdale at the crease.

Several were on their haunches, but they needn’t have worried.

He played the fourth ball of the over for two runs.

A dot on the second last ball of the day had the crowd on the edge of their seat.

Two off the final ball would secure the Premiership for Warrandyte.

The bowler placed his delivery on a length and with absolutely no hesitation whatsoever, Simpson pounced on it with a textbook, lofted straight drive over mid-off.

Even before the ball hit the fence, the team and the crowd were in raptures and members of both groups alike rushed to the middle to swarm Warrandyte’s hero.

Warrandyte had secured their inaugural flag by three wickets.