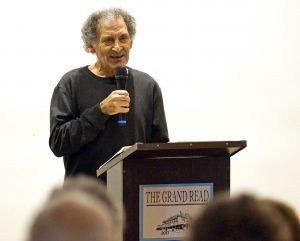 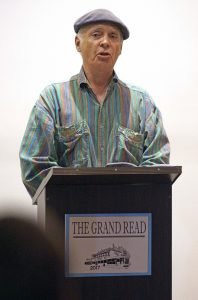 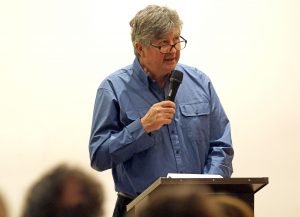 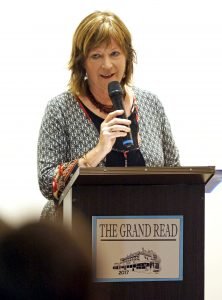 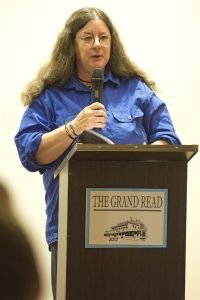 THE Grand Read may not have been going for as long, but this literary event has long been the cherry on top of the fabulous cake that is the Warrandyte Festival.

Grand Read regular Jock Macneish gave a warm introduction, setting the tone for an intimate evening in the packed-out function room of the Grand Hotel.

He is an advocate for human rights and a lot of his work focuses on the experience of immigrants.

He has many literary accolades to his name, including: People’s Choice Award: Tasmanian Pacific Fiction Prize for his novel Cafe Scheherazade (2003), nomination for The International IMPAC Dublin Literary Award for Sea of Many Returns (2010), and Life membership to Writers Victoria (2015).

Arnold Zable writes about refugees and the plight of the human condition, he describes his writing as a “beacon of hope for those displaced, disconnected, and disorientated”.

He described his writing as “painting with words” and before every passage read he would ask the audience of close to 100 if we could “see it”.

Zable chose to read from his latest book The Fighter: A True Story.

He writes about the life of Henry Nissen, an immigrant from Germany who settled in the working class suburbs of Melbourne and represented Australia as a flyweight boxer in the 1960s and 1970s.

Zable’s words recreate the harsh world that Nissen grew up in, but he spun his prose poetically and the audience hung on every word.

The Fighter: A True Story has been shortlisted for the 2017 Victorian Premier’s Literary Award for Fiction.

The Grand Read frequently favours poetry over prose, as the shorter form fits well with the evening’s format.

Following Arnold Zable’s poetically woven words were a series of enjoyable poems from a variety of artists.

John Jenkins read extracts from his poem The Wine Harvest, a poem that reflects on a time, in 1999, when he worked as a labourer on the wineries of the Yarra Valley.

His poem displayed some wonderful allegoric qualities as he recounted the hard life of a labourer through wine tasting terminology.

Karen Throssell, who has published a number of poetry books including Chain of Hearts, and The Old Kings and Other Poems, and who currently teaches Creative Writing classes in Diamond Creek, took the evening along a path of politics with a whimsical poem exploring her observations of Donald Trump’s youngest child during Trump’s victory party following the 2016 US presidential election.

Andrew Kennon reflected on his experiences in the High Country.

Sandy Jeffs, originally from Ballarat, is a poet who writes about her experiences living with schizophrenia.

She is an advocate for living with mental illness and author of the best-selling book Poems from the Madhouse.

For the Grand Read, Jeffs read a couple of poems: Cold Chemical Comfort illustrated the numbing effects of modern day drugs, while her poem about celebrity and the fascination with it that popular culture demands, was sobering but refreshingly chemical.

Kevin Bonnett, author of De-icing the wings, read from his poem Lake Louise as well as a series of responses to photographs.

Laurie Webb is a bush poet who spends a lot of time working with local communities in Africa.

He read from his latest poem Gratitude Journal which is based on his experience with PTSD after being involved in a car crash in the Congo.

The evening also featured a reading from Warrandyte’s own Jock Macneish, whom recounted a trip he made some years ago to Scotland, where he went on a journey to find George Orwell’s lost motorcycle.

You can read his story in the travel section of this month’s Diary.

The evening was a wonderful finish to the festival and the poetry and prose on show was stimulating and inspiring.

If you have never been to the Grand Read before, then make sure you come along next year, I certainly cannot wait to see who they will have on show in 2018.