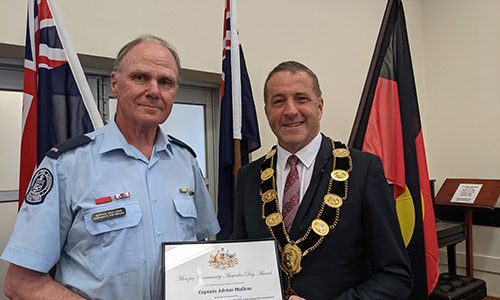 SOME WONDERFUL volunteers have been recognised in various Australia Day awards across the country.
Our own local volunteers were recognised in ceremonies held in Menzies, and in the electorate of Menzies, which incorporates Manningham.
Federal Member for Menzies, Kevin Andrews awarded 20 individuals for their contribution to their local communities.
“They are people who just selflessly go about their own quiet ways of contributing to the community —people who don’t seek recognition, but deserve recognition — and I believe this is an important day for us as a broader community to recognise those people who quietly build the community in which we live,” Mr Andrews said.
He said over the almost 20 years of holding the awards, there have been almost 1,200 people recognised.
The Menzies Awards also recognise community groups who enhance the lives of the people of Menzies.
“It is through those community groups that we are such a strong place, such a wonderful place to live, because of that unseen work that so many people do, which is the glue of the local community that we build together,” he said.
Cr Andrew Conlon, Mayor of Manningham, which makes up a large part of the Menzies electorate, said that it was wonderful to be able to express gratitude to those in the community who have selflessly served the greater good and have made a positive difference to someone else’s life.
Cr Conlon said they were “great examples of what it means to be an Australian”.
The individual awards went to; John Barnes, Steve Buys, Gee Wing Chung, Colleen Danaher, Ross Dawson, Zakir Fakhri, Malcolm Ferguson, Ila Franklin, Trish Hargreaves, Sue Hudson, Alston Jerome, Tony Louey, Adrian Mullins, David Ryan, Christian Sharkey, Liz Stewart, Stuart Steiner, Ron Twining, and Cheryl Watt.
The 2021 Community Organisation Award was presented to the Women’s Friendship Group, who was presented with an Australian Flag, which had previously hung at Parliament House in Canberra.

Captain Mullens has given over 36 years of volunteer service, including eight years as Captain and over 25 years as a senior officer in the CFA.
Captain Mullens has responded to and commanded numerous life-threating emergency situations resulting in the protection of life and property, including the Warrandyte Fire in 2014, for which Captain Mullens was the Incident Controller and successfully contained the fire, which had great potential of causing devastation across Warrandyte.
Adrian commenced with the CFA in 1984, has attended numerous fires throughout the state and indeed Australia, his strong and experienced leadership style ensures his crews are well able to protect the Menzies community.
Adrian told the Dairy he was humbled to accept this award, but stressed that it is a team effort, and the award acknowledged the work of the whole brigade.
“We have seen with the different leaders over the years, the brigade has got bigger and stronger — it is a matter of us working as a collective team,” he said.

David Ryan deployed as an active Regimental Sergeant Major with the Victorian Army engineers during the 2019/2020 bushfire crisis.
Utilising the experience gained in a 32-year career in Army Reserve including in East Timor, border protection operations and numerous exercises in Australia, New Zealand and the Philippines, he produced outstanding results, helping to coordinate relief operations for the Victorian community.
As President of the Warrandyte RSL for the last four years, David has excelled in providing remembrance and social activities for the Warrandyte and Menzies community.
Following the ceremony, David told the Diary he felt it was good to have people recognised for the contribution they do to the local community.
“But it is always humbling and hard to accept, but it is an honour to be recognised for the work you do over the years.”

Christian joined Wonga Park Scouts as a volunteer in 2013, since this time he has been supporting young members actively encouraging them in their endeavours.
Christian assists with numerous activities, ensuring the smooth running of the group, does a great job in planning and running events for the Youth members, and often fills in for other leaders when they are not available.
Each year, Christian plans and leads the families in assisting at several local community activities including Anzac Day ceremonies, he provides significant time and commitment to the group.

Stuart joined Wonga Park Scouts as a volunteer in 2013.
During this time, he has worked tirelessly assisting young members mentoring them in a variety of different skills and knowledge.
He provides guidance and support to youth in reaching their potential.
Stuart is also instrumental in maintaining the scout hall, providing
significant time and commitment to the group.
Each year Stuart plans and leads several family hikes for the entire group ranging from day hikes to weeklong hikes.
He ensures all of the aspects of these hikes, from gear to transport, food and navigation all run smoothly.

A Templestowe resident for more than 30 years, Ron Twining has served as a Justice of the Peace in Manningham since 1983 and has attended to the needs of local residents for more than those three decades.
A former criminal investigation branch squad detective of Victoria Police, Ron is currently President of the Templestowe RSL and has conducted Anzac and Remembrance Day services for the past 18 years.
A much-loved neighbour and member of the local community Ron’s commitment to Manningham in many areas has been outstanding.
Spending 13 years in Victoria Police as a senior detective, he also made great contributions in commerce in 20 years as national general manager of an Australian transport company.
Ron has been a proud recipient of the Victoria Police Medal, the Australian National Service and Australian Defence Medal, and in 2017 he was the Manningham Citizen of the Year.

Cheryl’s connection with Doncare commenced close to 30 years ago when it was a much smaller organisation, in her typical capable style she looked after administration and finance.
As the organisation grew, she introduced the idea that in the better interest of Doncare, the growing complexity of the business required an accountant, Cheryl remained to support the accountant.
Close to 10 years ago, Cheryl made the transition to social support for seniors’ program and very quickly became integral in the many lives of Manningham seniors, arranging opportunities for them to enjoy hundreds of social activities, assisting them to make friends and avoid social isolation and loneliness.
She has an amazing ability to organise and run the programs, encourages the people around her, has an amazing sense of humour, and is a great listener.
Cheryl was not able to attend the Ceremony, but the award was accepted on her behalf.

Nillumbik announced their Australia Day awards at a ceremony in Eltham on January 26.
Mayor Peter Perkins said the award recipients and their achievements — and those of others nominated — underlined a strong legacy of community service in Nillumbik.
“Today’s award recipients highlight the strength of commitment to helping others that exists in our community,” Cr Perkins said.
“While their ages and backgrounds may be diverse, this unwavering commitment to bettering the lives of those around them is the thread that draws them together.
“It is also a reflection of an attitude among the broader Nillumbik community.
“I congratulate and extend my heartfelt thanks to today’s award recipients — and to all those in our community who work so selflessly to help improve the lives of others.”
Cr Perkins said the theme of this year’s ceremony resonated strongly with the community.
“Today is an opportunity for us all to reflect, show respect and to celebrate as we are all part of the story – and this is especially so after the year we’ve just been through.

Through his work with the CFA as a member of the Diamond Creek Fire Brigade, Josh has been involved in the response and recovery from significant events including the 2009 Black Saturday bushfires and the Christmas Day flash floods of 2011.
A member of the Rotary Club of Diamond Creek, Josh’s work in the community has been notable for his energy and enthusiasm, along with his ability to collaborate with various local groups and services, including the Men’s Shed, Lions Club and Diamond Creek Traders’ Association.
He was instrumental in securing the W-Class Tram, which now occupies such a prominent place in the new Diamond Creek Regional Playspace and operates as a community café.

Peter Talbot
Volunteer of the Year

An active member of Community and Volunteers of Eltham (CAVE) for 20 years, he has also been Liaison Officer for Eltham High School and Eltham Lions Club President.
Over this time, he has been tireless, despite his own health setbacks and challenges, in driving fundraising efforts for various important community causes.

Jan Aitken has been fundamental to the development and success of the Nillumbik Reconciliation Group.
For 13 years as President, she has worked to connect communities through passion, warmth and a commitment to Reconciliation.
Numerous other community organisations, including schools and individuals have also benefited from Jan’s dedication to giving over the years.

Over the past year Finn has balanced the completion of his Year 12 studies with his commitment to volunteering for a variety of community organisations.
These include the Eltham CFA, Nillumbik’s FreeZa Group, Nillumbik Unplugged and Eltham Life 3095.

The Rotary Club of Diamond Creek
Community Group of the Year

Despite all the challenges of 2020, the club managed to push ahead with a range of initiatives and projects to help those in need of support.
These included the Second Bite project (providing food to the disadvantaged) as well as a range of arts and education initiatives.