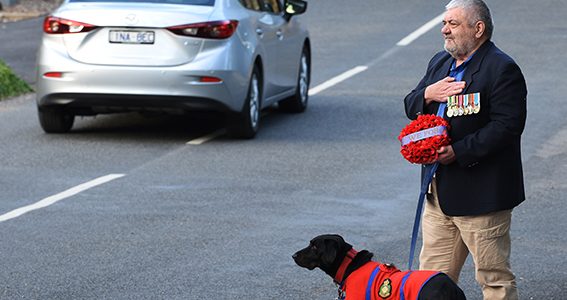 Stand apart but together for our Anzacs

IN THIS EVER-CHANGING climate of uncertainty, social distancing and working from home I would like to remind you of the importance of looking after those around us.

As the President of the Warrandyte RSL I would like to call on you all as a community to ensure we are caring for our families, friends, veterans, members of Anzac House and the elderly.

The priority of the Warrandyte RSL is to support veterans and their families during the coming months and difficult times ahead.

We will endeavour to do our best to support those in need.

In some cases, you may be required to request additional support from RSL Victoria.

The Warrandyte RSL traditional Anzac Day service will be very different to what most of us are used to.

The community march along the main road to the Memorial RSL grounds has been cancelled.

Warrandyte RSL will hold a Commemorative Service, but we ask our local community to stay at home.

Anzac Day is not cancelled; we are asking families to commemorate the day at home by watching or listening to the Dawn Service on television, the internet, or on the radio.

We are also asking people to participate with a Stand-To gesture.

At the time of the Last Post bugle call, we are asking members of the community to stand to attention at the end of their driveway, or on their veranda, balcony or deck, with their right hand on their heart and then to stay there, with their head bowed for the one minute’s silence which follows.

It would also be great if families and individuals could take a selfie of themselves doing this and share it on social media with the hashtag #STANDTO.

Musicians are being urged to play the Last Post on their lawn at 6am.

Anzac Day can be a deep, meaningful and nearly spiritual experience for everyone.

While it is primarily the recognition of the camaraderie, mateships and sacrifices made by the ANZACs.

Remembering their sacrifice is particularly relevant given the sacrifices we are all being asked to make during this time, as the whole of humanity does what it can to combat the spread of COVID-19.

This year, we are unable to sell Anzac badges locally, at schools, or on the street.

We shall, however have tins (for donations), and Anzac Badges available at the counters at Quinton’s SUPA IGA.

If members of the community would like to buy the limited-edition Anzac biscuit tin, please ring the Warrandyte RSL on (03) 9844 3567. I THOUGHT I knew the ANZAC story well but recently stumbled upon a new insight — the story of Charlie Ryan.

He was born at Killeen Station just north of Melbourne in 1853.

The son of a grazier, Charlie dedicated his life to medicine and the care of others.

He graduated as a surgeon from the University of Edinburgh in 1875.

However, the Russo-Turkish war of 1877–1878 broke out and Charlie found himself in the Balkans at the siege of Plevna as a young military doctor.

Despite his brave caring of the wounded, he was eventually captured by the Russians at another front in Eastern Turkey.

After the war, Turkey honoured Charlie’s distinguished service with the Order of Mejidiye (4th class) and the Order of Osmanli, the second highest order in the Ottoman Empire.

A hero to the people of Turkey, he returned home to Melbourne in 1878 to become a successful civilian doctor.

He also was made the representative — similar to an ambassador — of the Ottoman Empire in Australia for some years.

He still liked army life and continued as a Captain in the Volunteer Medical Service.

Charlie was the doctor who tendered the wounded bushranger Ned Kelly, and after his execution — declared him deceased.

At the outbreak of World War 1, Charlie enlisted as the Senior Doctor for the 1st Division, Australian Imperial Force (AIF), and landed in Egypt just after his 61st birthday.

He had enlisted to fight the Germans.

Aboard the troopships bound for the ANZAC landings at a dinner for senior officers Charlie knew more than anyone how hard the Turks would fight to defend their homeland.

It prompted him to state: “If, after 40 years, I am now about to fight them, it is not because of a feeling of enmity, but because of orders I have received as a soldier”.

Clambering up the steep cliffs of Gallipoli on April 25, 1915, Charlie and the ANZACs landed on the peninsula to face the Turkish commander, Mustafa Kemal and his troops.

On May 19, the Turks launched a major attack which became a slaughter; over 3,000 Turks lay dead in no man’s land.

Both armies wanted to bury the dead as the putrid smell had become unbearable.

A one-day cease fire was declared on May 24 and on that day, both sides buried their dead in shallow graves.

This was the first time; the Turks and Australians came face to face and talked to each other.

There are diary entries about swapping Turkish tobacco for bully beef.

Respectfully, the seeds of comradeship between two countries were sown on that day — this still thrives today.

Charlie Ryan carefully attached his Ottoman Medals and, armed with only a box camera, proceeded to direct his medical staff tending the wounded.

Some Turks became seething, thinking he had stolen the decorations.

In an unused Turkish voice of 40 years, the distinguished looking doctor was able to placate the situation.

All stopped their gruesome tasks, time seemed suspended, the Turks remembered the “Hero of the battle of 93” — Charles “Plevna” Ryan.

Shortly after this infamous armistice, Charlie contracted dysentery and typhoid.

He recovered and was knighted by the King in 1916 and appointed the senior doctor of the Australian Army until November 11, 1918.

Charlie was the hero of two countries.

It is a wonderful book straddling this defining story of a little-known hero for both countries and it is a story every Australian should know, and cherish.

A copy of the book, as well as a special package for teachers can be purchased from
www.friendsofgallipoli.org

The true meaning of Anzac Day

WHEN ON United Nations Peacekeeping and Demining operations in Africa in 1994/5, I had the unique and pleasant opportunity, to spend a few days on leave at the spectacular Victoria Falls.

Going for a pre-dawn stroll, on Anzac Day in 1995, to pay my respects, I came upon three fellow visitors to this magnificent natural wonder.

The first was a tourist from Japan, we exchanged cordial pleasantries.

Next, was a robust and jovial German on his first trip to Africa — we thoroughly enjoyed each other’s company.

Finally, I bumped into an outgoing and friendly South African Boer, who was visiting the amazing Victoria Falls for the first time.

It made me reflect deeply — as these men were all former enemies of Australia.

It also made me reflect on the mammoth task of trying to rid a country (Mozambique) of the appalling remnants of war (landmines).

It took 20 years for Mozambique to be the first severely landmine affected country in the world to be declared “landmine free”.

How long does it take to declare ourselves free of the other effects of war?

Just before Sir “Weary” Dunlop, the great Australian Prisoner of War Doctor, passed away in 1993, I had the honour of hearing him speak at a formal regimental dinner at the Oakleigh Army Barracks.

He spoke with reverence and sincerity, of the need to forgive past enemies.

Despite witnessing horrendous atrocities during the latter campaigns of the Second World War, he had come to the understanding — that forgiveness is probably the greatest of human attributes.

War is the result of deep divides in society, and it is in peace, where we heal those divides, that our true spirit lives.