DIARY REPORTER STEPHANIE CARAGLANIS recently sat down with Josh Teskey to discuss his new 8-Track Blues project with Ash Grunwald.
Titled Push The Blues Away, the album features raw blues instrumentation, combined with soulful and reflective lyricism.
Read on as Steph and Josh talk roots, inspiration and Josh’s pie of choice from the Warrandyte Bakery.
The Teskey Brothers are proud Warrandyte boys, so how did growing up in Warrandyte inspire you creatively?
Well, I think a big part of growing up in Warrandyte that inspired us was probably the music community around us.
I mean that was one of the biggest things, people like Chris Wilson and local Blues musicians, we were surrounded by Blues.
They have a thing for it in this area, it has influenced our music massively.

How would you describe the sound of Push The Blues Away to both new listeners and existing Teskey Brothers fans?

What we were doing growing up, prior to the release of the Teskey Brothers albums, in a live setting — it was more in that soul realm, a more raw sort of Blues thing.
We have always been very influenced by that and played a lot of that.
This project is a lot more along those lines, it is really back to basics Blues and there is nothing complicated about it.
There is not even really a rhythm section, it is just me and Ash on guitars, a bit of harmonica, stomp boxes — it is raw and almost a bit rough around the edges.
We just wanted to have some fun with it, so we did not want to get too complicated.
We did not spend heaps of time fixing little things up, you hear a little bit of laughing in the background, or there might not be the most perfect little vocal takes, sometimes.
We wanted it that way, it is almost kind of live sounding.
A lot of what we recorded was basically live in the room, every one of these tracks is just Ash and I playing through the song, what we put down that was it.
It is really raw, that is the way I would describe it.

I think that is a bit of a hidden gem, a lot of people do not really know there is a Blues scene hidden in Warrandyte.

That is right!
There are a lot of artists who live in and around here, more than we realise.
It is a special little thing.

I definitely noticed that!
Especially on Thinking ‘Bout Myself, you guys have the harmonicas, the claps which is really stripped down and different from what the Teskey Brothers usually produce, can we expect this stripped back instrumentation throughout the entire album?

Absolutely!
There are no drums, there is no bass guitar.
I just finished an album with the Teskey Brothers when we started this project, where we did a lot of production, strings sections and horns.
So this was really fun for us, we did not want to do a lot of production on this one, just made to be really fun and really easy.

So you and Ash have collaborated previously on his track Ain’t My Problem, why did you decide to go all the way and collaborate on a full album together?

Well, it just kind of escalated you know?
One thing sort of led to another.
It began when he did that track with the Teskey Brothers, he sent us the song and we became the rhythm section on that tune he sent us.
A few months later he came out to our studio in Warrandyte to do a film clip, we were going to film a little thing of me and Ash having a jam together — I just had a harmonica and he had a guitar.
When you are filming things like this there is a lot of waiting around.
So we were waiting around, having a jam in the room, and got to talking, saying “ah wouldn’t it be great just to do an album like that one day?, just a guitar and a harmonica in a room and do some of that stuff we have always loved.”
Ash being the hustler that he is, gives me a call a couple of weeks later and says:
“Hey! Do you have any time? We should just do this!”
We did not really know what was going to come of it, it began by being together in the studio, I did not know if we were going to release it or just have a bit of a jam.
But he came out for a week and my brother, Sam, came out to the studio here.
Sam set up all the stuff, he also produced and recorded this thing as well, so he has been very involved in a lot of ways too.
As we got into it, I came in with a couple of songs I put together just a couple of days before.
Ash had a couple of songs he put together, then we thought of a couple of covers we were into, a couple of old Blues standards — and before we knew it, we had eight or nine songs sitting there ready to go.
And we were like “Man there is a whole album’s worth here”.
Before we knew it, Sam mixed it all together and our label, Ivy League Records said: “Yeah! We should release this.”
It was a very cruisy process and now we have got a whole album. 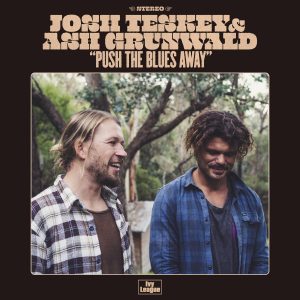 I really liked the music video you guys produced for Hungry Heart just that very cosy homemade video, it was very cute and organic.

It was really fun for us.
It was an appropriate video to do during isolation.It was more about working out what we could do, film a bit of our lives — as that is all we can do at the moment.
I think my favourite thing I have heard someone say about you is “When I close my eyes I hear Otis Redding and when I open them I see Thor”.
How do you feel about being compared a Marvel hero?
I love it!
People have been telling me I look like Chris Hemsworth for many years.
It was such a funny thing, Chris discovers our music, next thing I know I find myself at the Avengers premiere walking down with Liam and Chris.
It was very bizarre seeing how the Hollywood crew do it.

Do you and Ash share any musical influences and how did that influence this new project?

Well I think it is really appropriate for the Warrandyte Diary here.
Ash actually grew up in the same area as well, you know he was close by.
I actually grew up watching Ash!
When I was about 13/14, I used to watch Ash play sets out of the St Andrews pub.
I would be busking at the market with Sam; we would come up after the market, get some food over at the hotel there and Ash was always playing a set.
So I grew up watching Ash play Blues.
He was one of those influences in the area, which was really cool, alongside people like Geoff Achison and Chris Wilson.
About five years later, I am watching him play the Main Stage at Falls Festival.
In a big way he has influenced our music as well.
I tell him now we used to grow up watching him, because he discovered us independently.
We even did a gig in Northcote where we supported him, he did not remember that.
The Teskey Brothers were a support for him, and then when Ash found us to do a bit of work on his album he could not believe we into his music back in the day.
We are very closely connected in many ways.

That is a wholesome story.

He is a beautiful character, he is a lovely guy, and it has been a really nice fun project just to work with him and get to know him, he has a really great soul.

I feel like this is my most imperative question of the whole interview, what is your order at the famous Warrandyte Bakery?

Very nice!
Okay, I have been going down for years and I just love getting some croissants.
I usually get about five croissants on a Sunday.
If I am not doing that and I am just a bit hungry, and I want to get something, I love the veggie pie down there which is delicious!
I think it is far superior to the veggie pasty.
I also normally get a cheeky caramel slice, so a veggie pie and a caramel slice would be my first choice, ha ha!

A little bit of an unpopular opinion hey?

I feel like everyone goes for the beef pie and the vanilla slice.

That is a bit of a classic, I do love the classic beef as well.
But there is something about that veggie pie, and not a lot of people know about it!
It is a bit of an inside secret.

I love it, you are putting the veggie pie on the map single-handedly.

Absolutely!
Try it out Warrandyte, try it out.