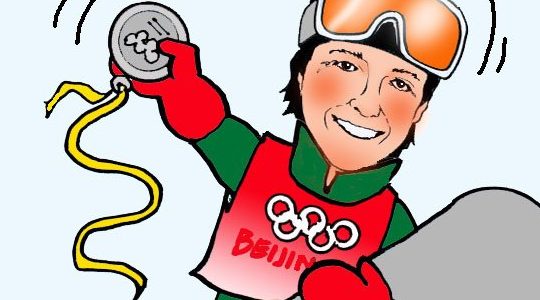 WARRANDYTE’S own snowboarding legend has been pipped at the post in his run for a Gold medal at the 2022 Beijing Olympics.
He was a favourite for Gold after recently bringing home the goods from the X-Games in January.
James entered the final in second position and was hopeful of taking the top honour.
After a stumble on the first run put him in 10th position, a blistering second run, with a score of 92.5 gave him the lead going into the all- important final run.
“We are lost for words right now, but we knew that was going to be an improvement — forget the rest, we have the best with Scotty James,” the lead commentator said.
When he couldn’t best it in his final run, it was down to the final competitor, Japan’s Ayumu Hirano as the only one who could beat him for the prize.
Scotty still had gold in his sights, while spectators held their breath as the Japanese rider pulled out a spectacular performance and snatching the Gold with a 96.0.
James now adds an Olympic Silver medal to the Bronze he took home from Pyeong Chang in 2018 and says he has his sights set for Gold in Milan to complete the set.
He farewelled his long-time rival, Shaun White, for whom these games are his swansong.
In a post-event interview with Channel 7, James said: “I have had such a great time here in Beijing.
“This has been such a special Winter Games.
“This guy [White] is very, very special”.
He labelled White the Greatest of All Time.
“To Shaun, obviously huge respect to him — the guy is the GOAT… it’s been incredible to be here with you.
White then praised James’ silver- medal-winning run: “Crushed it! I was seeing the switch back doubles to the deck … I was like, come on!
“You are just crushing them effortlessly — to see you throwing down is just awesome.”
Then Warrandyte’s hero asked his rival for support in his campaign to compete in 2026, saying: “If you have the time, I have one more medal I need — if you want to help.”
White laughed as he replied: “I will back you!”
And rest assured, so will Warrandyte.

Students show their support for a local hero
By CLAIRE LAMBERT WARRANDYTE PRIMARY School (WPS) sports teacher Sally Freemantle was thrilled when Channel 7 contacted her, asking students at WPS to be filmed showing their support of snowboarder Scotty James in the Winter Olympics.
Students were eager to get behind this and excitedly prepared banners and streamers to wave to remind Scotty that his hometown was behind him every step of the way to Olympic glory!
Photographs of the students made it to the official Australian Olympic Team Facebook Page and appeared on the Channel 7 coverage of the Winter
Olympics and Sunrise.
It was a fantastic experience that all students enjoyed being a part of and a great introduction for most of our students to the sport of Snowboarding.