Teaching in the internet age

HOW MUCH has the role of a teacher changed over the years?
There are some that would argue it has  always  been  hard  work  and  the stresses of teaching have always been present.
Yet,  the  traditional  idea  of  a classroom  no  longer  fits  within  the world our children live in.
Society has changed and, as such, the students that enter into our education system require a completely different set of skills, and the modern teacher is adapting.
A teacher has traditionally been the gatekeeper of information.
Cast your mind back 20 or 30 years to  when  a  teacher  had  access  to  the  information  and  chose  what  to  pass onto the student.
Without  internet  access,  24-hour news,  or  mobile  phones  to  locate and  receive  instantaneous  facts, information  was  limited,  it  was  the teacher  who  held  the  keys  to the kingdom of knowledge.
In today’s classroom, teachers have had  to  shift  their  practice  to  work in  line  with  a modern  world  where classroom walls are eroding.
The global student is surrounded by facts, opinions and information from everywhere.
We  can  no  longer  separate  this globalisation  from  formal  education and so the role of a teacher must now teach  the  students  to  filter,  analyse and critique that information.
Head  of  La  Trobe’s  Department of  Education,  Associate  Professor Barbousas  says  the most  important skill  a  teacher  needs  in  the  21st Century is adaptability.
They  must  arrange  and  modify information  so  it  can  become knowledge for students.
Teachers  have  also  become a  parent’s  partner  in  their  child’s education.
Schools  are  communities  within communities  and  the  interaction between  teachers  and parents  has become an essential relationship.
The  old  saying,  it  takes  the  whole village  to  raise  a  child,  is  still  very relevant in today’s globalised world.
Then  there  are  things  that  should never change.
Ask  teachers  why  they  teach  and rarely will they say they want to simply impart knowledge onto students.
They  will  answer  in  terms  of changing the world, helping another human reach their potential or being part  of  something  that  makes  a difference to others.
The  moral  purpose  of  a  teacher  is always at the core of what they do and while the methods of delivery and the complexity of the student is changing, the reasons for teaching them remain the same.
The  45,000  public  school  teachers across  Victoria  work  to  inspire  and motivate students  to  be  the  best possible  versions  of  themselves  that they can be.
There  is  nothing  more  satisfying than  seeing  a  student’s  face  light  up when they feel success.
It  becomes  the  motivator  for  the hard  work,  and  it  lies  at  the  heart  of everything a teacher does.

A Trip to the moon 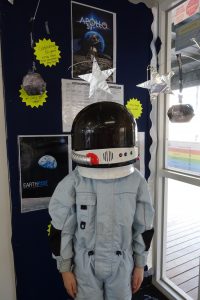 ON  JULY  19,  Warrandyte  Primary School  celebrated  the  50th anniversary  of  the  moon  landing  by the Apollo 11 mission.
The  students  came  dressed  in  a variety  of  costumes  that  ranged from  Jupiter,  to  space  and  of course astronauts.
Acting  Principal,  Rick  Griffiths said:  It  is  so  important  that  we commemorate  these  important events in the history of mankind”.
The  students  really  enjoyed watching a video of the rocket taking off  and  then  following  its  trajectory out of the atmosphere and then intoorbit around the earth.
“There  was  so  much  wonderful discussion  about  gravity,  the  size  of the  atmosphere  and  the amount  of energy supplied by the fuel to propel the  rocket  into  orbit,”  said  science teacher Jenny McDonell.
In the upper grades the discussion revolved around many of the familiar things that we use on a regular basis that were developed due to the space program.
A  few  of  these  include,  Nike  Air trainers,  LEDs,  camera  phones  and CAT scans.
No great learning happens without some hands-on activities.
Students  across  the  schools  loved making  their  own  paper  rockets  — and  they  were  surprised  by the distance they travelled.
The  plans  for  these  rockets  can  be found on the NASA website if anyone is interested. www.jpl.nasa.gov/edu/learn/project/make-a-straw-rocket/
Some grades made cardboard moon rovers,  and  others  made  astronaut  landers.
These  activities  helped  them  to  understand  the  complexity  of  the  whole Apollo 11 mission.
All in all, it was an enjoyable day for all in celebrating a significant event in human history.

ONE  OF  THE  most  commonly  used terms  in  Victorian  schools  today  is “student voice”.
Not  simply  a  catchphrase,  schools genuinely  work  towards  giving students  a  voice,  not  only  in  their learning,  but  also  in  the  decision-making  process  for  whole  school  events.
At Anderson’s Creek Primary School (ACPS) being part of the Junior School Council  (JSC)  means  you  are  given  a forum  to  put  forward  your  ideas  and  those  of  your  peers  in  regular  formal  meetings.
At  the  beginning  of  the  year,  the  elected  members  of  the  JSC  devise  a  list of things they wanted to achieve.
This year, that list included a desire to use their position to create fundraising events  for  a  range  of  charities  their  peers had identified as worthy causes, close to their hearts.
After  inviting  the  school  principal to their lunchtime meeting, a suitable date  was  agreed  upon  and  they  were advised  to  devise  a  plan  to  advertise and put a theme in place for the day.
The  charity  selected  by  the  student body was the RSPCA.
A  dress  up  day  was  organised with  students  coming  dressed  in  an  animal theme and making a gold coin donation towards the event.
The JSC used the weekly newsletter and  assemblies  to  advertise  their  event.
JSC  Coordinator,  Evie  Fifis,  says the  representatives  took  their responsibility  very  seriously  when organising and running the event.
“They  wrote  a  presentation  about the  cause  and  educated  the  school community on the important role the RSPCA  has  in  rescuing  animals  who have  been  mistreated  and  the  costs associated  with  providing  medical care.”
The school community also learned that  part  of  the  role  of  RSPCA  is  to provide evidence kits to assist police in charging those who mistreat animals.
The  day  was  announced  as  a  huge success  with  a  $491  being  raised  for their cause.
“The  Junior  School  Council  is  a wonderful  example  of  community coming together to make a difference through  student  voice,”  says  Ms  Fifis, “we  are  looking  forward  to  planning more exciting fundraisers throughout the year.”