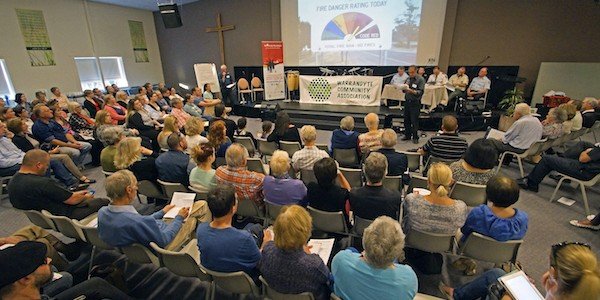 A packed audience of more than 160  from Warrandyte, Park Orchards and surrounding townships actively participated in a ‘Be Ready Warrandyte’ bushfire scenario based on the February fire – but with significant changes and potential outcome.

“Our BRW local emergency service officers envisaged what could have happened last February if a similar situation had escalated”.

The scenario was a serious fire in Park Orchards spreading to North Warrandyte with a wind change.

Steve Pascoe and Joff Manders did a great facilitation job, painting the picture, asking the questions and engaging both the panel of experts and the audience.

Questions such as “what are your actions triggered by this warning” and “what are the dangers facing you now” elicited a lively interaction between the facilitators, audience and panel.

Steve is a Strathewen resident who experienced and survived the impact and aftermath of Black Saturday.

Cartoonist Jock MacNeish captured some of the proceedings in his inimitable style.

Mr Buffone congratulated the WCA and the Warrandyte community on the success of the evening and the level of community engagement.

At the end, Mr Davies presented Pastor David Molyneux with a Certificate of Appreciation in recognition of the outstanding assistance in hosting fire meetings from the Warrandyte Community Church to the Warrandyte community since Black Saturday 2009.