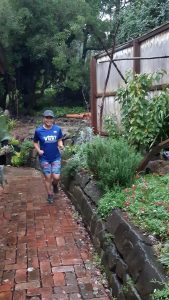 IN MID APRIL, North Warrandyte resident Michelle Chan set out to complete a home isolation ultra-marathon — which is a continuous run of more than 42.2 kilometres within the confines of one’s own property.

After 9 hours, and 294 laps of an approximately 150-metre-long loop of her block, she had done it.

Michelle joins a growing number of global runners, who have managed to find a way to continue to do what they love: to run a long way, for a long time, within the scope of their country’s restrictions.

In some countries, runners have done this by running laps of their balcony or their dining room table (with some courses measuring a mere 30 metres).

In the pre-COVID-19 world, Michelle was preparing to tackle her first 100-kilometre event, Surf Coast Century in Lorne in September.

In April 2019, she finished her first 50km event in the Blue Mountains at Ultra Trail Australia (UTA50).

“After completing UTA50 with some friends, we started planning some events out, so I did Two Bays in January, the 56km, and the other plan was to do Surf Coast Century.”

But training for a large event such as Two Bays or Surf Coast Century is a very different experience to waking up one day and deciding to hang laps around the yard.

“So all the other nutters on the Victorian Ultra Runners (VUR) Facebook Page started doing these iso runs during Stage 2, and I like challenges.

“Being in Warrandyte, I don’t have a small back yard so I thought it was possible.

“I had a few other friends do it, I planned a weekend with nice weather and then once I said it, I had to do it.

“I had been planning it for a few weeks and it wasn’t until my husband started analysing my route around the garden as well, I thought ‘okay, I’ve got my support crew’”.

The Victorian Ultra Running community may have upward of 2,600 members but it is a community who know each other, VUR founder, and Doncaster resident, Jon Lim has been responsible for several social challenges, which see members hitting trails for elevation or distance, so I asked him why there had been so much appeal when he first suggested the community took up the challenge of running a self-isolation ultra at home.

“I posted the question about the isolation ultra and within a week, seven people had done it, and they were all wearing their VUR tops — I had people messaging me asking if they can get a top so they can run their isolation ultra in it.

“People just want to be part of that community, you know — with a group like that, if you suggest an idea, you often don’t have to push very hard to get people to do it.”

Seeing uptake of the idea, Jon asked Melbourne based running coach Chris Wright to administer the Self Isolation Running Facebook group, which has grown from being a small offshoot of the VUR Facebook Group to a truly international affair with some of its 1,300 members in the UK, Spain and the USA.

I asked Chris where he thinks the attraction lies in running laps of one’s property.

“I think once that seed of ‘I can possibly do this’ takes root then ‘boom’, they’re off.

“I think having a safe forum where they can celebrate it is also what attracts people,” he said.

Another feature of the home ultra movement has been the extent in which people are documenting their runs.

While some are simply uploading photos and screenshots of Strava, others (and there are quite a few) have shot video, even livestreamed their attempt via Facebook.

“It’s great to watch, it’s a bit like test cricket, you know there is not much happening but it is nice to check in to see if anything has happened.

“It adds a bit of accountability too, there could be people there who have been cheering you on, so when it gets hard, to have that bit of leverage and support from social media goes a long way.

“For people whose hobby and love is being outside and in remote areas, this situation has caused people to change the way they do things to hit those core values, and it has mutated to be something that is really amazing.

“In these times where there is so much political stuff going on, maybe there is something quite refreshing about watching someone run 50 kilometres in their backyard, on a live feed, and not to have to worry about [things like] the toilet paper that has run out on the shelves of the supermarket,” said Chris.

As in other areas, and as has been documented in other parts of this edition, it is a sense of community, and of one’s own accountability driving people to do these extraordinary things in unusual times.

For Michelle, with her home-grown support crew and friends who “deliberately went for their walks” at the same time to cheer her on mid-way, she did not need to resort to livestreaming for her own attempt.

Although she has no intention of running nearly 300 laps of her yard again, the community around her has celebrated her achievement.

The big question now is: when will I run my first home ultra?