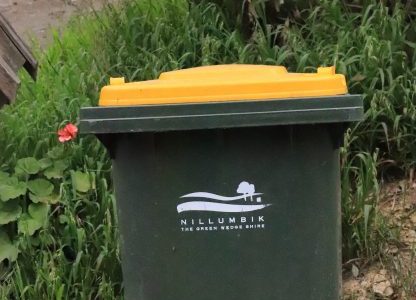 AT THE ELEVENTH hour Nillumbik Shire Council have secured a short-term deal with SKM receivers, KordaMentha, to deliver all recycling material to the recently reopened Laverton North facility.
In a press release issued on Sunday morning, Nillumbik Mayor Karen Egan welcomed the new deal.
“This is exciting progress for our residents, who are enthusiastic recyclers and have been waiting patiently for proper services to resume,” she said.
However, the new deal has a number of restrictions which means it is not exactly business as usual.
Bundled plastic bags will no longer be accepted and any resident wanting to dispose of them should take them to a REDcycle program receptacle at Coles or Woolworths.
Stores in Eltham, Greensborough, The Pines, Diamond Creek and St Helena participate in this program.
Council has also said it does not have capacity for additional collections which means residents who have been stockpiling their recyclable material, in anticipation of services returning to normal, will need to take it to Council’s Recycling and Recovery Centre at 290 Yan Yean Road, Plenty.
The new deal is also putting Nillumbik, and its residents on the frontline in the war against waste.
“The new arrangement is a lot stricter. If our recycling is more than 10 per cent contaminated, it may be rejected and sent to landfill.
“It’s up to residents to do the right thing,” said Cr Egan.
If and/or when the Laverton North facility is sold to another company, Council will likely need to renegotiate with the sites new owners.
KordaMentha is the advisory and investment firm appointed as receivers and managers to SKM Recycling Pty Ltd in August.
KordaMentha also received a $10 million State Government loan to aid in the restarting of proper recycling processes for the groups seven sites.
Nillumbik used to deliver to a facility in Coolaroo, but that facility currently remains closed.
Nillumbik Mayor Karen Egan thanked residents for their patience as Council worked to find a way through what is a national crisis.
“Nillumbik residents are among the best recyclers in Victoria and I encourage you to continue your efforts through our kerbside collection,” Cr Egan said.
Council’s Recycling and Recovery Centre is also open to the public to drop off paper, cardboard and metals for recycling.
The cardboard and paper is collected from there by Veolia and taken to the VISY paper plant in Coolaroo, where it is made into new recycled packaging.
The metals are taken to Ecocycle where they are sorted and then recycled locally and overseas.
The fallout from SKM Recycling Pty Ltd entering receivership is still plaguing the State.
Every week there is another story in national press about the mess left by SKM after they failed to pay their creditors.
While the 33 councils impacted by this recycling crisis look to find solutions that avoid sending waste to landfill; warehouses, such as the one owned by Marwood Construction in Derrimut (as reported in The Age on September 29), which has 10,000 tonnes of waste stored by SKM before it went into receivership, currently have no way of getting rid of it.
The ABC recently reported that Indonesia is preparing to send 100 containers of plastic back to Australia following a discovery that the waste, earmarked for recycling, was contaminated.
The bottom line is, while the resumption of recycling services is good news for Nillumbik residents, this issue is far from over, to emulate the words of Nillumbik’s Mayor, it is up to all residents, regardless of municipality, to do the right thing and to continue to reduce, reuse and recycle.