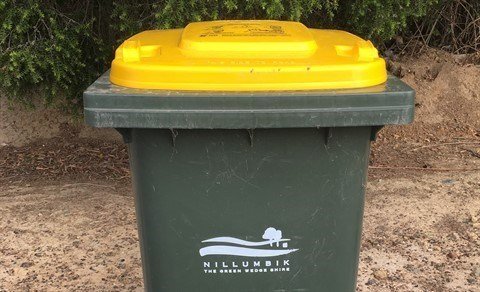 ON AUGUST 13, Council released an update regarding the recycling situation in Nillumbik:

Council is working with the State Government’s Metropolitan Waste and Resource Recovery Group (MWRRG) to find an alternative for the Shire’s recycling. Council has a contract with SKM through the MWRRG. SKM’s closure affects several councils and about half of Victoria’s recycling.

The broader, long-term issue requires a response from all levels of government. At this stage SKM, while temporarily closed, has indicated that it is working to recommence receiving recycling.

Council will continue to collect recycling bins as normal and encourages residents to continue their recycling efforts until this is resolved, it’s important we keep working together to meet the current challenges.

Unfortunately we expect this week’s recycling will be sent to landfill.

The capacity of alternative facilities in the north of Melbourne is limited and the MWRRG is working to find alternative arrangements.

Why can’t Council follow Boroondara’s lead and use Visy or another provider for its new recycle facility?

Nillumbik Shire Council is one of five Councils that has a contract with SKM Industries Pty Ltd through the Metropolitan Waste Resource Recovery Group (MWRRG). A separate company, SKM Corporate Pty Ltd, was recently placed into liquidation. SKM Recycling have advised that SKM Industries Pty Ltd is still able to trade.

Notwithstanding current contractual arrangements, the biggest hurdle for alternatives to processing recyclables appears to be the lack of excess capacity in the northern region to be able to process the kerbside recycle materials.  Other Councils appear to be taking advantage of capacity in other regions. The additional transport costs associated with processing outside the northern region is currently being quantified to help assess the value of any alternative arrangements.

Not a single Councillor, staff member or community member wants to put recycling to landfill, it goes against everything we stand for, so you can be assured we are doing everything we can to get through this.

What does council recommend for residents and how can residents help?

These source-separated materials are sent to dedicated recycling facilities not affected by the SKM closure.

Residents can also help by avoiding and reducing the amount of waste generated in the first place, only placing the recycling bin out for collection once it’s full and taking soft plastics to Coles/Woolworths for recycling through REDcycle.

What are Council’s next steps?

In the immediate term, Council has no choice but to send kerbside recyclables to the landfill.

In order to understand and manage the contract risk, Council is currently having daily interactions with MWRRG given the situation with SKM is fluid.

In the medium term, the best outcome is that the recycling infrastructure currently owned and operated by SKM continues to operate to process municipal kerbside recycling, whether the operator is SKM or another party. This infrastructure is capable of sorting to the level required by markets both locally and overseas.

In the longer term, Nillumbik is participating in process initiated by MWRRG to explore a collaborative contract for recycling.

ON AUGUST 2, the Supreme Court ordered recycling processing business SMK Recycling is now to be liquidated.
This followed a July 25 announcement that the firm would cease accepting Council recycling waste from 33 municipalities, including Nillumbik.
As a result, Nillumbik Council, which has been sending all its material from household recycling bins to SKM, may have to divert this material to landfill until a new solution is found.
Moments after news of SKM’s imminent demise was made public, Nillumbik issued a press release, advising residents of the situation.
The Council have continued to collect recycling bins as normal and encourage residents to continue their recycling efforts.
After the courts announcement, Nillumbik Mayor, Karen Eagan said residents can help by reducing the amount of waste they generate whether its recycling, food or general waste.
“Every effort is being made by Council to find short term, interim and long term solutions, including finding alternative recycling options.
“Like several other councils that are also affected, we’re very concerned about how we’re being forced to send recycling to landfill this week”, she said.
Cr Egan said Council will continue to work with the Metropolitan Waste and Resource Recovery Group and other councils to create sustainable solutions for managing waste.
Nillumbik has been in a long-term collaborative contract with Wyndham, Brimbank, Melbourne and Port Phillip Councils, with the Metropolitan Waste and Resource Recovery Group as contract principal — this contract was not due to expire until 2026.
Cr Egan said the state’s recycling service is a state-wide and long term issue that “requires a stronger response and commitment from all levels of government”.
Apart from the obvious concern of all environmentally-conscious residents that recyclable material is once again going to landfill, there are serious financial aspects to this fiasco which will undoubtedly have a significant effect on Council rates in future years.
Sending this material to landfill comes at a cost, as all Councils have to pay a State Government levy for every tonne of material deposited in landfill — an extra expense that has not been budgeted for.
Additionally, any contract with an alternative collector would come at a significantly higher price than that agreed with SKM.
More worrying is that although we do not know what advance payments, if any, have been made to SKM, we do know that at the last Council meeting on June 25 the existing contract was amended to change the price.
That item on the agenda was held in camera, and despite our enquiries to Council as to whether additional sums over and above the original contract agreement had been paid to SKM in the last month, we are told that “the detail remains confidential”.

Earlier this year, SKM was ordered to stop receiving waste at its Coolaroo and Laverton North sites after they failed a waste audit and SKM was fined $16,000 for failing to get its facilities back within regulation within the prescribed timeframe.
SKM has been in an insolvency hearing at the Supreme Court, facing liquidation from creditors, with debts reported to be in the millions.
The recycling company — who has contracts with 33 Councils in Victoria — had warned 400,000 tonnes of recyclables would be sent to landfill each year if the company was to permanently close.
There is genuine concern that this will become the reality.
As the recycling situation has deteriorated during the last month there has been no shortage of blame in the mainstream press.
Minister for Energy, Environment and Climate Change Lily D’Ambrosio recently labelled SKM as a “rogue operator”.
Victorian Waste Management Association’s Chief Executive Peter Anderson criticised councils for continuing to send recyclables to SKM and of being irresponsible in maintaining their contracts with the company.
SKM pointed the finger at households for contaminating the recyclable rubbish.

There are a total of 79 Local Councils in Victoria.
33 Councils across Victoria had contracts with SKM to collect and process their waste.
The other 46 used Visy or similar waste and recycling contractors.

The 33 Councils which have been impacted by the liquidation of SKM are:

At this point in time, all other Councils in Victoria are still able to collect and properly process recycling.