VOLUNTEERING is part of the fabric of Warrandyte.
In October the community voted on who they think should be the next recipient of the Community Spirit Award, an award sponsored by the Warrandyte Community Bank Branch in honour of outstanding volunteer work in the community.
Achieving 90 per cent of the vote, Maxine Rosewall, who runs a wildlife shelter out of her North Warrandyte home for Help for Wildlife (HFW), was presented with her award at Warrandyte Community Bank’s AGM.
Sue Kirwan, HFW manager and friend, had these words to say in her nomination for Maxine.
“Maxine has been a wildlife carer for more than 20 years.
“This is a voluntary role with no government funding.
“She rescues and rehabilitates wildlife with a special passion for birds of prey.
“All expenses come from her own pocket and she is on call 24/7.
“She is also an active member of Help for Wildlife a state-wide volunteer organisation and charity.
“Maxine has a strong sense of community and has also been a volunteer at other local charity groups.”
When asked to list three words to describe Maxine, Sue chose dedicated, ethical and compassionate.
After meeting Maxine, it is hard to disagree with Sue’s words.
When I first asked Maxine her  thoughts about winning the award, she seemed perplexed.
“Because it was two volunteers being voted on, I thought that was a bit odd because volunteers do what they do for a different thing.”
But, as Lance Ward, Managing Director of Warrandyte Community Bank, told me — it is because of this that Maxine is the ideal recipient for this award.
“Working in and for the community, our directors see first-hand the good work being undertaken by volunteers and as such our Board decided to acknowledge and celebrate those wonderful folk who demonstrate the values of Community Spirit.
“There are many unsung volunteers working quietly from their homes and within community groups and clubs, the Community Spirit Award was created to put a spotlight on those working behind the scenes.
“Maxine is a shining example of a volunteer who has worked tirelessly ‘above and beyond’ for many, many, years.” 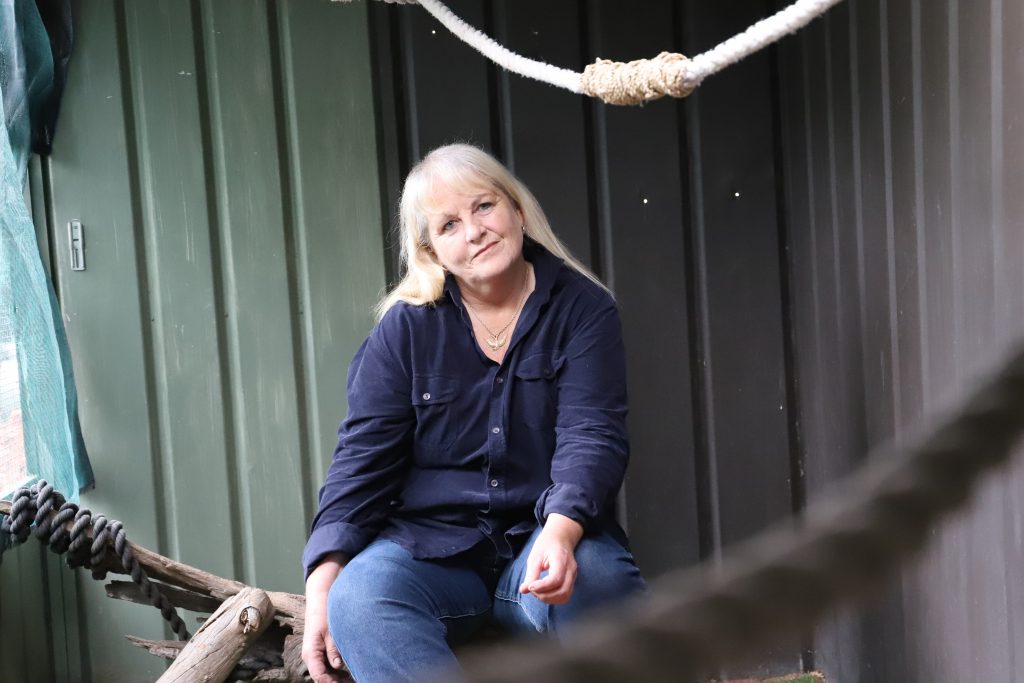 Maxine has had a passion for wildlife since she was a little girl in Eltham, where she used to visit a local wildlife carer and artist who looked after wild birds.
“There was a lady there and birds would fly through her windows… I was always finding an excuse to go up that street to be invited in to have a look.
“I think my fascination with birds started there.”
In 1998, Maxine moved to North Warrandyte and, under the guidance of renowned wildlife carer Ninon Phillips, learnt how to look after wild birds and other wildlife.
Maxine joined Help for Wildlife after receiving her wildlife shelter permit and has an aviary set up on her North Warrandyte property where she rehabilitates birds.
But Maxine’s compassion for birds does not just come from a childhood passion.
Maxine had a career in aviation but had to give it up for medical reasons and said “because I was winged, I can help them get their wings back.”
But work as a wildlife rescuer is emotionally taxing and there are, unfortunately, more bad news stories than good.
Maxine recounted several experiences where the animals had been involved in road accidents, animal attacks (from domestic pets) and of birds who end up tangled in barbed wire fences.
“There are rules of what gets saved, they have to be viable – the eyes have to be open, the ears have to be up and it is really hard to tell someone ‘I know it is alive but the chances that they will not make it are very high’.
“So we have to deeply think about that and how it will affect the public, but all of this is because of the public,” she said.
She said that nature and society living in close proximity is a large part of why these animals come off second best.
Bushfire can also inflict extended suffering on Australia’s indigenous species.
“Two months after the Bunyip fires we were getting called by farmers to come down and assess some of the larger roos — they had obviously been burned two months before, but it takes that long for the infection to get up their legs and then they just can’t move, and then it goes to organ failure and it is quite a long, torturous death actually.
“So we would go down there every weekend for a few months there and that will never leave me.
“And they weren’t all big old ones, they were little ones too — but it’s the kindest thing to do.
“There is a lot of that in what you do.”
While there is some support for wildlife shelters, carers and rescuers — Maxine spoke about a compassion fatigue session she attended, run by Help for Wildlife, which allowed Maxine and her peers to “get some things off their chest”.
The job is often distressing for both the carers and the wildlife and the opportunities to vent are limited.
Which makes Maxine’s recognition even more significant.
She also spoke about the recent bushfires in New South Wales and Queensland and the devastating impact that has had on the koala population.
“The politics involved in the koalas getting all that money has put a lot of other groups out, but that money can set the reseeding of that area with the koalas for the next 25 years and that is a wonderful thing.
“If I lived up there and looked after another species there is no way I would be jealous or anything like that – it’s all in.”
She says she tries to avoid the politics.
“It’s also an area that has a lot of politics in it, but working on my own I never got to see that side — really — so much time and effort goes into [politicking], you could be doing something else that is beneficial.”
While Maxine’s work and attitude is inspiring, she recounts how she is also inspired by some of the random acts of human kindness she has witnessed.
From donations by locals to Help for Wildlife to the community of Doreen who rallied together, with help from the Doreen Produce shop who bought vital food and equipment to help farmers affected by the Bunyip bushfires.
Maxine dedicates her life to helping injured wildlife and making sure the other Help for Wildlife shelters around the State are OK.
She liaises with Sue Kirwan during the summer, keeping her informed on the fire danger rating and weather conditions.
Maxine offered her congratulations to co-finalist Louise Callaghan on her  nomination and wished her the best for her community projects, and gave thanks to the Warrandyte Community Bank and to Sue for her nomination.
Maxine does not expect recognition for her passion which is why she is fully deserving of this award.