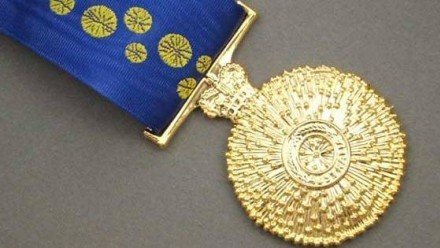 Congratulations to Jan Davies and Doug Seymour who have each been awarded an OAM in this year’s Queen’s Birthday honours. Doug was also a foundation member of the Warrandyte Environment League in 1970, where he served as President for more than six years.

Doug told the Diary he was surprised by the award, but said it was “much appreciated, as the nomination must have been put forward by some of the wonderful Warrandyte people I have worked with in the interests of sensitive planning and conservation values over the past 40 years”.

“We value our heritage bushland character and conservation values and you are never alone when the battle goes forward in this town,” he said.

More recently he has been on the committee of the Warrandyte Community Retirement Cooperative, which has been working to enable older Warrandyte residents the opportunity of staying within Warrandyte when the typical Warrandyte block becomes too much to maintain.

The cooperative built the award-winning Creekside retirement village, and are nearing completion of the new Riverside development in West End Road.

The honour has also recognised Doug’s tireless work for the community of Warrandyte on his work on numerous committees, including the WCA’s Be Ready Warrandyte campaign, which promoted fire safety throughout the community, as well as his volunteering with Friends of Warrandyte State Park, where he has been a member since its inception in 1982. Dr Janice Davies (B.Sc Hons, Grad Dip HRM, MBA, PhD) has been recognised for her considerable contribution both to health care throughout Australia and to her local community in Warrandyte over the last 40 years.

Jan Davies’ two faceted award acknowledges her generosity with her time with pro-bono and community activities, in addition to her considerable achievements in her professional life.

As a leading innovator in the health sector in Australia, she has introduced “communities of practice” to clinicians around the country — helping health service leaders identify ways to improve the clinical services they deliver to patients.

She established the National Institute of Clinical Studies (NICS) in collaboration with Professor Chris Silagy AO and worked with Alzheimer’s Australia to introduce new programs designed to improve the care and design of services for people with Alzheimer’s.

Jan has an abiding commitment to protecting some of the most vulnerable people in the community.

Jan has also been actively involved in a national bullying prevention program, and in caring for and supporting victims of sexual assault.

One of her earliest projects, in the 1990s, was to head up and coordinate the establishment of the North- East Centre Against Sexual Assault (NECASA).

The legacy of Jan’s volunteer work is enjoyed by the thousands of people who use the Warrandyte State Park, the Warrandyte Community Centre and our many cultural and social facilities.

Her passion for community health is seen in the many trekking tours she has organised, and her leadership of the Heart Foundation Walking Group.

In this role, she spearheaded a campaign advocating for the State Government to purchase land in North Warrandyte now known as Koornong Reserve and was instrumental in convincing the then Eltham Council to purchase the environmentally sensitive Professors Hill land as a Council Reserve.

She also persuaded the then Doncaster and Eltham Councils to purchase vacant garage land in central Warrandyte as a site for a Community Centre.

The Warrandyte Community Centre was later developed by Manningham Council to house the community library, Warrandyte Diary, the Neighbourhood House and facilities to host many other community functions and activities.