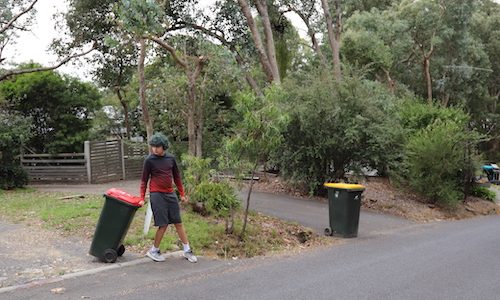 No flies on this young entrepreneur

WARRANDYTE teenager Jett Appleby (15) is taking the first steps in what
could be the beginnings of an entrepreneurial journey.
In December 2020, Jett launched Thebinsronus, a community focused bin-run enterprise in which, for a very modest fee, Jett will put your bins out, and bring them back in, every week.
The Diary sat down with Jett, at his home in Warrandyte, to talk about this new community service.
I started off by asking him what motivated him to start his venture.
“We’ve all got to start somewhere, it would be good to build up a portfolio,
future employers would probably like that.
“Plus if I feel good about myself, being able to get involved in the community and I make some cash along the way as well,” he said.
Jett also spoke about the other ideas he had.
“I thought about washing bins for a bit but I don’t think it is something I
want to do.
“I had some other ideas — like mowing the lawn, but that was immediately crossed off.
“There was mowing the lawns, there was washing bins, there was washing cars but this seemed the most suitable.”
The rolling hills and large blocks which characterise the Warrandyte landscape can often make the weekly walk to the street an arduous task and the community were invested in Jett’s service from the moment he pressed send on his first Facebook post.
“I think it was the night I posted the ad, about two hours after I posted.”
Jett’s client base, is still relatively small, covering about 12 streets at the bridge-end of town.
His business is still in its very early stages, and while there is no immediate plan to extend his operation, it would appear the demand is there.
“Most of the feedback I get is ‘expand to other areas’ because these are people who want the service in their area.
“But it takes time to expand and that is most of the feedback I really get.
“I don’t think I can expand to everyone, but you never know.”
Jett’s approach to this new venture is pragmatic and, after speaking to him, I come away with the impression that if this project was to not work out, he would simply move onto something else.
But Jett has taken the time to think about marketing and setting himself up as something more professional than the more common teenaged job enterprises.
“Thebinsronus, I am trying to brand it as one word, except to make it shorter we are using the letter r instead of the word ‘are’.
“I just want to seem a bit more professional.”
Father, David, also sees great potential in Jett’s enterprise.
“I am delighted to see that he has got this enterprise and I am very proud of him.
“I think it is great and the fact that he is getting out there and doing work is great, character building and providing a genuine service for a modest fee.
“I think it is a good idea, I can see it taking off it was done really professionally,” David said.
If you would like a break from the bin-run, and support community enterprise, get in contact with Jett via his Facebook page
facebook.com/thebinsr or via phone/text on: 0478 583 505