THE REPORT from the independent Planning Panel enquiry into Manningham Council’s C117 Planning Scheme amendment has now been published.

The controversial amendment seeks to encourage tourist-related activities within the Green Wedge and had been the subject of a three-day hearing at Planning Panels Victoria in October at which many local individuals, community groups, businesses and the Council made presentations.

The amendment proposes three related but potentially independent changes to clauses within the planning scheme.

The first of these is to change the Municipal Strategic Statement at Clause 21.07 to give greater support to tourism in the Rural Conservation Zone (RCZ).

The panel threw this change out, and recommended that changes to this clause be abandoned.

Changes to Clause 22.19 propose to allow outbuildings and sheds in the RCZ to the same extent as currently applies to the Low Density Residential Zone.

The panel found that these were reasonable.

The new local policy at Clause 22.20 intends to provide more guidance for non-residential land use applications in the RCZ, covering design, location and scale of new buildings.

The panel found that this clause provided useful guidance to applicants, but had some trouble with the wording and suggested improvements.

The Panel concluded that “the broader policy position to support more tourism in the Green Wedge is contrary to sound planning and runs counter to the purposes of the RCZ.”

However, it conceded that many of the issues with this broader policy position were beyond the scope of the Panel.

The Wedge Tails website, sponsored by the Warrandyte Community Association, the Friends of Nillumbik and the Green Wedge Protection Group describes the Panel’s report as “a major win for community involvement and for the values of the Green Wedge in the face of the usual commercial pressures. 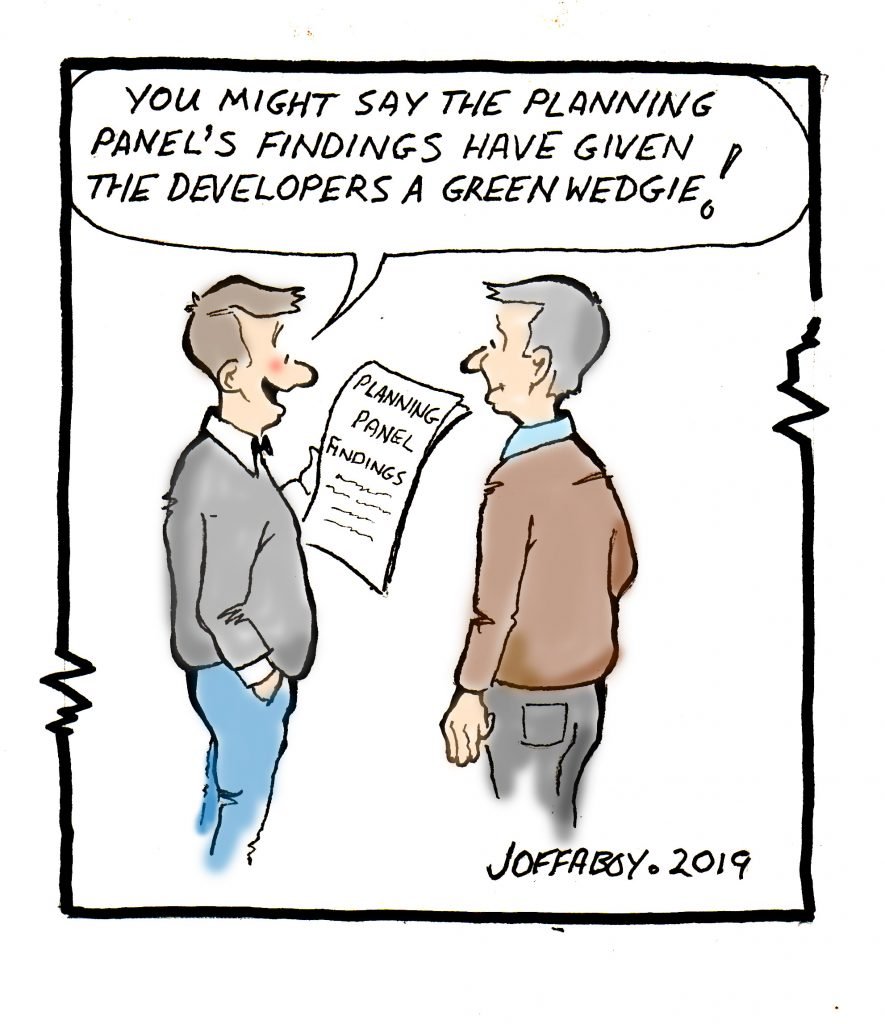 “It is also evidence that the system can work as we would want it to.

“The Panel left no doubt that it understood the essential purposes of the Rural Conservation Zone and of the Green Wedge generally.”

Friends of Warrandyte State Park were delighted with the outcome of the panel hearing.

Lynda Gilbert said “FOWSP have been engaged in a number of environmental battles with other like-minded community groups to save the Green Wedge because there are so few places close to the city where humans can observe the wildlife and admire the flora in its natural state.

“There are some 24 restaurants and cafes in Warrandyte already, as well as several B&Bs and a caravan park nearby in Deep Creek, so we do not need any more development as it will severely impact on the habitat for our flora and fauna.

“Our only hope is that Manningham City Council accepts the Panel’s decision.”

Jamie Day, who is seeking to promote an eco-friendly low-impact tourist camping facility at Pound Bend said “I find it disappointing that it seems, in regard to tourism related business activity within the RCZ, the status quo might remain; that would restrict business activity that could be complementary to the area.”

Others who gave evidence at the panel hearing in favour of the amendment were approached for comment, but declined to say anything at this stage.

We now await the response of Manningham Council to the Panel’s report.

“The Report was made available to the public on Council’s website on January 8 this year and Council will consider the Panel’s recommendations at its Council Meeting on February 26, 2019.”

Manningham Council could choose to abandon the entire amendment, or they could put the amendment forward to the Minister for Planning either as it is or including some or all of the Panel’s recommendations.

The final decision will rest with the Minister.

For more information about the C117 amendment and a link to the Planning Panel report: yoursaymanningham.com.au/C117

NILLUMBIK Council’s meeting on December 18 continued to run what appears to be a bunfight between Friends of Nillumbik in the one corner and Nillumbik Proactive Landowners Group (PALs)in the other.

As we reported in the December issue a community panel of 39 members had produced a 64-page Community Engagement Report to Nillumbik’s Green Wedge Management Plan (GWMP) of which 32 pages were the majority report, and a further 32 pages were a dissenting Minority Report, prepared by five resident hobby farmer panel members.

Because the full panel did not see and was unaware of this content Mayor Karen Egan determined it would not be considered by Council.

PALs have responded, saying the half of the report now being considered is “illegitimate”.

At the December meeting, Mayor Egan attempted to defuse the situation by saying Council welcomes a submission from the dissenting Panel members — and the wider community — on the draft Green Wedge Management Plan, which will be released for broader engagement in early 2019.

But the meeting quickly descended into farce with the seven amendments to edit various sections of the response document, many being lost on divisions, and personal accusations flying around the room in a meeting that lasted almost 3.5 hours.

The final resolution that passed with amendments requests Officers to commence writing the draft GWMP for consideration by March 2019 for the purposes of wider community engagement.

Council spokesman Licardo Prince told the Diary: “The aim remains for it to go to the March 26 meeting and then subsequently be put out for further community consultation.”

And Nillumbik Council problems are not confined to the Green Wedge issue.

The Council returned two weeks earlier than expected in the middle of January on a Thursday night at a special meeting to consider a motion to rescind a decision made at the December 11 meeting that refused a planning application.

The rescission motion was defeated, but not before Councillors blamed each other for calling the Special Meeting at additional expense to ratepayers.

This is a divided band of Councillors, and it will be interesting to see how they handle the proposed GWMP at their March meeting.

Nillumbik’s GWMP and links to the Engagement Report are at:
https://participate.nillumbik.vic.gov.au/gwmp