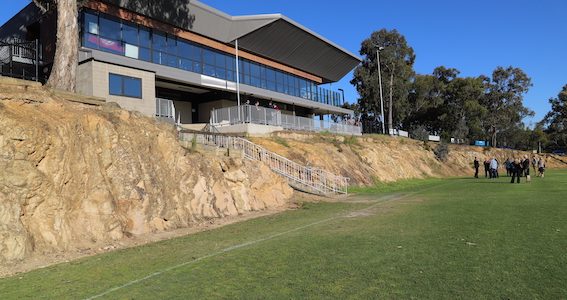 CRICKET AND FOOTBALL in Research has a shiny new home, with the opening of the $3 million Research Park Pavilion.
Eltham MP Vicki Ward opened the pavilion on behalf of Local Government Minister Adem Somyurek.
She said she understood the importance of having such a community facility in Research.
“To be able to have every gathering that people want to have, at a venue in Research, is just fantastic,” she said.
The redevelopment project took almost 10 years from conception, and replaces the ground’s ageing infrastructure, and followed a huge turnout to a pivotal council meeting in 2017, which was attended by almost 300 club members in a show of support.
On the strength of the community engagement in the project the Council adopted the two-story option, rather than just a single-story pavilion.
The expanded clubrooms allow for a social space both for the resident clubs, but also for the whole community. The then Mayor, Peter Clarke told the Diary that Council had to decide between a $1.2m single-storey pavilion, or an $1.7m double-storey.
“What it achieved was the financial viability of the clubs, because the clubs earn money out of that space as well as lease it out.”
He said the facility fills a need in Research for a community hub, and Council is encouraging community groups to use the space during the week.
“You do these things once and you do them really well — there is no good doing two-thirds of the task.
“This will last for 30–40 years — it’s a good investment in the future,” Cr Clarke said.
The two-storey redevelopment at the park, which is home to the Research Junior Football Club (RJFC) and Research Eltham Collegians Cricket Club (RECCC), has allowed for greater participation across the community.
Current Deputy Mayor Bruce Ranken, who is also the social infrastructure portfolio councillor, said the new pavilion was long overdue.
“The previous sports pavilion on this site was ageing and no longer fit for purpose,” Cr Ranken said.
“Council listened to what the community had to say and now we have this modern all-inclusive facility.
“This project shows what can be done with people power.”
Nillumbik Mayor Karen Egan said the upgrade included the addition of two much-needed female change rooms and facilities for female umpires.
“This wonderful new facility is a win for our whole community and, importantly, caters for the growing number of females in sport,” she said.
“Both the football and cricket clubs have had increasing numbers of female members over the past few years.
“But the growth of female participation in sport locally has been restricted by the lack of facilities and I’m pleased we are smashing these barriers here in Research,” Cr Egan said.
Paul Northey from Research Junior Football Club said that the new facilities would be fantastic for their 15 junior football teams — including four girls’ teams — and “would be an asset for the whole community for generations”.
Chris Cunningham from the Research and Eltham Collegians Cricket Club who play out of the facility said that the stadium would allow access for their 10 junior teams, including two girls’ sides, six mixed seniors’ sides, and a veterans’ team, an over sixties team and an all-abilities side.
Nillumbik Council contributed $1.69 million to the project as well as $265,000 for the upcoming car park works.
The State Government provided a total of $950,000, with $650 through the Growing Suburbs Fund, a $100,000 grant from Sport and Recreation Victoria and $200,000 in funding through a State Government election commitment in 2014.
“We went into every bucket,” Ms Ward quipped.
The football and cricket clubs raised $130,000 for the pavilion.
The pavilion features an upstairs community hall with kitchen, bar and meeting rooms overlooking the grounds.
Downstairs are four player change rooms, umpire change rooms and an accessible toilet and lift.