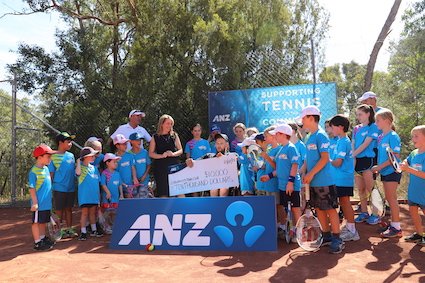 WORLD NUMBER One wheelchair tennis player, Dylan Alcott had a hit-up with the kids’ at the South Warrandyte Tennis courts in February.

He was there to present a cheque from the ANZ Bank to the Warrandyte Tennis Club to enable them to install five purpose-built kids courts.

The South Warrandyte annex of the Warrandyte Tennis Club will convert two of their full-size tennis courts into two “Red Ball” courts, which are 1/4-size courts, and three 3/4-size “Orange Ball” courts.

The ANZ Tennis Hot Shots program allows kids to gain tennis skills and technique on smaller courts before having to develop the power to hit on the full size courts.

The low compression balls make the game fun and accessible for kids as young as three.

Warrandyte Tennis Club head coach Craig Haslam says they applied for the grant because the facility has been under-utilised, but with the renovation they will be able to participate in junior inter-club competitions.

“I am hoping that a lot of kids from all around the area will be able to play their matches here — tournaments too,” Craig said.

While this does remove two of the full-size courts from the Club’s fixture, there will still be eight adults’ courts available across the club’s two sites.

Dylan Alcott told the Diary he was “super-pumped” to come out to Warrandyte because he said it is important to support the next generation of young tennis players.

“You might not win the Australian Open, but tennis is such a great sport — it keeps you fit, and puts a smile on your face,” he said.

Along with the cheque, the club received merchandise, equipment, signage and access to a local ANZ specialist.

Tennis Australia CEO Craig Tiley said: “We are grateful for ANZ’s ongoing support of tennis and the ANZ Tennis Hot Shots program, and their commitment to growing the game from the grassroots level up.

“We’re excited for South Warrandyte Tennis Club and we know they will make the most of this wonderful opportunity.”

The grant will be supplemented by additional funding from Manningham Council.