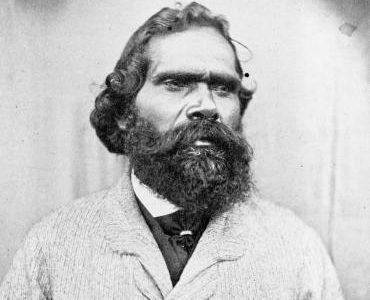 I HAVE WRITTEN before about how Simon Wonga developed a plan for the survival of the Kulin people in the 1840s.
This was for them to learn agricultural and stock mustering skills in order to establish an economic base in the new world they faced.
Wonga organised the last ever Kulin Nation corroboree in 1852 and gave his people the opportunity to play all their traditional games and thereby say goodbye to tribal life.

I have also told the story of how Wonga Park got its name, in tribute to Wonga’s stock mustering skills and charismatic leadership.
He was a great man, and to me Simon Wonga stands alongside Sir John Monash as the two greatest Victorians in our State’s history.
Perhaps you might agree with me when you hear a brief account of how he secured a government grant of land to establish Coranderrk Station at Healesville in 1863.
It was an achievement against all odds that showed his strategic brilliance.

Wonga’s father Billibelleri was Headman of the five Kulin tribes from 1836 until he died in 1846.
Wonga was then 25 and had been groomed for leadership.
Not because he was Billibilleri’s son, but because his innate ability, character and knowledge made him the standout choice.
However, Wonga did not feel he was ready, so in 1846 the leadership passed to Billibelleri’s younger brother Berberry.
When the government approved the establishment of an Aboriginal Reserve at Pound Bend in October 1850, Wonga decided he was ready for leadership.
Berberry willingly stepped aside and Wonga then began activating his plan.
Unfortunately, gold was discovered at Warrandyte in 1851 which compromised the viability of the Reserve at Pound Bend.
A new Reserve was consequently declared at Woori-Yallock, only for gold to be found there as well.
However, the meagre gold at Warrandyte and Woori Yallock was soon vastly overshadowed by the discoveries at Ballarat and Bendigo.
Curiously, the Ballarat and Bendigo gold discoveries turned out to be an advantage to Wonga’s plans.
With workers deserting their employment and flooding to the goldfields, it inadvertently drove up Aboriginal work opportunities and wages.
Wonga was therefore able to get contract work for Aboriginal people on farms up the Plenty and Yarra valleys.
Wonga in fact won the contract to build the first public house in Warrandyte.
It is a pity his name is not commemorated in some way at the present day Warrandyte pub.
With the disbandment of the Native Police in 1853, William Barak joined Wonga at Wonga Park, where they met the Reverend John Green who had arrived in 1858.
The three of them were to develop a most fruitful relationship over the next sixteen years.

In February 1859, Wonga received information that a settler in the Upper Goulburn had abandoned his run.
Wonga knew it was prime land, so he led a deputation of Elders to see the Aboriginal Protector William Thomas.
The deputation also included my great-great-grandfather’s friend, Murrum-Murrum.
Thomas got approval for them to claim the land, so Wonga, Barak and others left Melbourne, to establish Acheron Station in March 1859.
They were later joined by Reverend Green and others from Woori Yallock.

Over the next two years, Wonga and the Kulin people made a great success of the venture, but they were ultimately cheated out of the land by neighbouring squatters Hugh Glass and Peter Snodgrass.
Glass, a land speculator, was the richest man in Victoria and Snodgrass a Parliamentarian, so draw your own conclusions.
The Kulin were forced onto bleak and inhospitable land near Cathedral Mountain, where people started dying like flies.
So in early 1863, Wonga, Barak and Green led the remnants of their group across the Great Dividing Range, via the Black’s Spur Songline, to present day Healesville where they claimed land there.
Wonga had learned his lessons well.

The demise of Pound Bend, Woori-Yallock and Acheron had shown him he would get nothing from the parliamentarians.
So he went over their heads. On May 24, 1863, which was Queen Victoria’s birthday, Wonga led an Aboriginal deputation to Government House.
They presented gifts of woven baskets, artefacts and possum skin rugs to Sir Henry Barkley for ‘The Good Queen Mother’ and the just married Prince of Wales.
Then Wonga presented a petition for the land at Coranderrk.
Immediately afterward Sir Henry summoned the government leader and told him in no uncertain terms that if the grant of land was not made immediately, ‘the Queen would not be happy’.
The result was that a month later the land grant at Coranderrk was duly approved.
Over the next decade Coranderrk became socially and economically the most successful Mission in Australian history, until Wonga died in 1874.

So to me, May 24 is not Empire Day, it is Wonga Day and it should be fittingly celebrated as the start of Reconciliation Week each year.