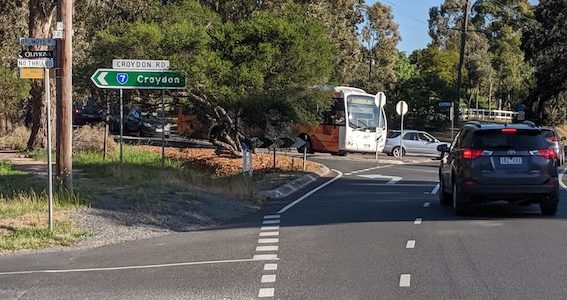 Every which way you turn

CALLS HAVE resumed for VicRoads to solve the dangerous intersection at Five Ways, where Croydon Road, Brumbys Road and Husseys Lane intersect with Ringwood-Warrandyte Road.
An online petition has gathered more than 1000 signatures after recently being returned to circulation.
It is calling for improved traffic controls at the intersection.
The petition was initiated two years ago and has recently resurfaced on Facebook where it has generated a lot of discussion.
Petitioner Renny Koerner-Brown told the Diary she was prompted to start the petition following several near misses with cars mistakenly turning into Brumbys Road “only to have them do an abrupt u-turn” in front of her “leaving me out in a horrendous intersection in on-coming traffic”.
Mary-Anne Lowe is a resident on Ringwood-Warrandyte Road, and says every day she navigates the intersection pulling a horse float.
She spoke with the Diary about the issues she has encountered.
“It is a daily occurrence to witness blaring horns, near misses and unfortunately I have also witnessed an accident with a horse float in the last two years,” Ms Lowe said.
She says traffic from all directions need a smoother transition and clearer instruction to make it safer for all road users.
Another South Warrandyte resident, Kim Dixon, said she has been sending letters to VicRoads for years about the intersection.
She says that the confusion at the intersection itself is only part of the problem.
“I reside in Colman Road and the traffic we get coming down our street, to avoid this intersection, is horrendous.
“[Colman Road] is not designed to take traffic travelling in both directions, it is extremely narrow and there are a number of places in which cars cannot safely pass each other,” Ms Dixon said.
She said that as a result of her ongoing complaints, around eight years ago Maroondah Council installed speed humps in their section of roadway and Manningham Council have also recently installed four speed humps.
“Unfortunately, these devices have not deterred the amount of traffic that use this road to avoid the intersection,” Ms Dixon said.
“In all my correspondence [to VicRoads] I have stated that the issue in Colman Road is a direct consequence of the dangerous intersection at Croydon Road and [Ringwood-]Warrandyte Road — I get the same reply, “this intersection is not our priority”.
Leigh Harrison, Director City Services for Manningham Council said Manningham Council is aware of congestion issues and safety concerns along Ringwood-Warrandyte Road and would support an upgrade of this intersection.
“The intersection is an important connection for local roads connecting to Ringwood-Warrandyte Road, including Brumbys Road which is a no-through road.
“While VicRoads is responsible for any upgrade works, options that could be considered include a roundabout or new traffic signals,” he said.
State Member for Warrandyte, Ryan Smith, said he has been asking the Government for several years about the intersection, but he says the response he has received has been disappointing.
“I have raised the very real concerns from local residents about this dangerous intersection on a number of occasions, but these concerns have fallen on the Government’s deaf ears.
“I would hate to think that a tragedy has to occur before we see any action from the Andrews Government.
“Fix the problem now so we can avoid the kind of fatal accident that many locals believe is an inevitability,” Mr Smith said.
Mr Smith showed the Diary a series of correspondence he has had with various Roads Ministers, during his last foray into the issue in March 2017.
Back then, he was advised: “VicRoads has been monitoring the safety record at the intersection of Ringwood-Warrandyte Road, Croydon Road and Husseys Lane in Warrandyte South.
“There has been no reported injury crash at the intersection in the most recent five-year period.
“The average two-way daily traffic volume on Ringwood-Warrandyte Road has increased from 5,700 vehicles per day in 2015 to 5,800 in 2017.
“The configuration of the intersection is in accordance with relevant guidelines and is similar to many other intersections across Melbourne.
“Based on the safety record and in inspection of the site, VicRoads considered the intersection to be operating safely for all road users.
“VicRoads will continue to monitor the road safety at this location to determine the need for any future improvements.”
Member for North East Metropolitan, Sonja Terpstra told the Diary she had not had any contact from constituents regarding this intersection, but that she would follow the issue up with the Roads Minister.
The Diary contacted VicRoads for comment and a Department of Transport spokesperson said that they receive many requests each year for safety improvements and upgrades to intersections, including new traffic lights, from across Victoria, and that all requests are prioritised based on the extent to which such a treatment would improve safety and/or congestion at each intersection.
The unnamed spokesperson said that VicRoads consider a range of factors such as the number and type of vehicles using the intersection, the need to cater for pedestrians, the historical safety record of the site and the impact the improvements would have on the surrounding road network.
“The safety of everyone travelling on our roads is our number one priority, and we’re continually looking at ways we can make it safer and easier for people to use our road network.
“We’ll continue to monitor this intersection to see if there’s any safety improvements we can make,” the Department of Transport spokesperson said.

THE ROUNDABOUT at Fitzsimons Lane/Main Road on the Eltham—Templestowe border has become the focal point of a conflict between green-minded conservation groups in the latest infrastructure development from the State’s Major Roads Project team.
As part of the $2.2million Northern and South Eastern Roads Upgrade, the roundabout, which marks the gateway to the Green Wedge from Templestowe, is planned to be developed into an 11 lane intersection, in an effort to reduce congestion and improve safety.
In background supplied by Major Roads Project Victoria (MRPV), the agency stated the upgrade would “benefit more than 60,000 people who use the busy road every day.”
“Unfortunately, some tree and vegetation removal will be necessary to carry out the upgrade.
“However, Major Road Projects Victoria will plant new vegetation where there is available land within the project boundary and manage landscape and vegetation loss in accordance with statutory obligations.
“Design revisions to date have been able to save more than 100 trees in the vicinity of the project, and any options to minimise the removal of trees will continue to be considered.” If you have not seen Eltham Community Action Group’s campaign against the development of this intersection on social media, you may have noticed the red ribbons tied around trees on and around the Fitzsimons/Main Road roundabout.
These are the trees currently marked for removal.
Nillumbik Council issued a press release on October 22 stating their disapproval of the upgrade in the face of opposition from residents and community groups with ties to the Shire.
“While Council recognises that congestion is a significant issue at the intersection and supports State Government efforts to improve this issue, Council does not support the planning process to deliver this project”.
In their last Community Update in April 2019, MRPV indicated construction would begin in 2020.
The Diary asked MRPV if there was any room for additional discussion and design changes to the project between now and 2020, to prevent the destruction of trees at the roundabout.
A spokesperson from MRPV responded:
“The Fitzsimons Lane upgrade will improve congestion, making it easier and safer for the community to travel through and around the area.
“We recognise that the greenery surrounding the Eltham Gateway is a key feature of Nillumbik’s unique landscape and we’re committed to minimising this project’s impact on the environment.
“We’ll continue to keep the community up to date as the planning stage progresses.
“We will consult with the community throughout the life of the project, ensuring that we continue to hear and consider their feedback on this important project,” they said.
MRPV has told the Diary it will be releasing revised designs — which save more than 100 trees in the vicinity — in the coming weeks.