Encouraging women to run for government

GOVERNANCE in many municipalities has long been dominated by male voices.

So, there is a drive by the Victorian State Government to inspire a new generation of women councillors ahead of the October local government elections.

Minister for Local Government Shaun Leane, announced the It’s Our Time campaign, which aims to inspire women to get involved in local government and nominate for election.

The push will include the provision of online resources including webinars.

Minister for Women, Gabrielle Williams, said Victoria is leading the country when it comes to improving gender equality.

“We want people of all genders to enjoy equal rights, opportunities, responsibilities and outcomes — and programs like this help us make it happen,” she said.

A century on from the election of the state’s first woman councillor, Mary Rogers, Victoria now boasts the highest number of female mayors in history with 32 in place across the state.

However, 13 of Victoria’s 79 councils have just one female councillor while overall, women account for just 38 per cent of elected representatives.

Locally, Manningham Council currently has a majority of women on council, with five out of the nine councillors identifying as female, while only two of the seven members of Nillumbik’s council are women.

Andrew Day, Manningham CEO told the Diary, with four female Mayors over the past eight years, Manningham Council has a proud history of electing women into leadership roles.

“Manningham Council is committed to supporting and celebrating gender equality and diversity within our community and among the Councillors who are elected to represent our community,” he said.

“During this time, the Councillors have elected two female Mayors and two female Deputy Mayors, which highlights the opportunities for local women in leadership roles at Manningham Council.

Mr Day said having an elected Council that adequately represents the local community with a good gender mix is important to Council decision making.

“This encourages a diversity of views and opinions to effectively lead and represent constituents, make strategic decisions and support good local governance for the wider community,” Mr Day said.

He said Manningham Council has a range of support options in place to help remove some of the traditional barriers for women standing for Council, including carer support options, payment of allowances and expenses for Councillor duties, and a flexible approach to meeting times to accommodate other personal or family commitments.

“As Manningham moves to a new nine ward structure, we encourage women and people of all ages and backgrounds who are interested in representing their local community to stand for Council at the upcoming October election,” Mr Day said.

“For local government to be a true reflection of the communities we serve it is important to have representation of both men and women, as well as people from a range of diverse experiences.

“Not only do women make up just over 50 per cent of the population, but men and women have very different ways of looking at things — together, we represent a wide range of views and offer different perspectives on the important issues Council needs to consider for our community.

“I’m proud to be the first Mayor from the rural ward of Bunjil,” she said.

Ms Egan said standing for Council can be tough, particularly in rural areas.

“You have to have a thick skin to withstand the personal attacks and opposition, and financially, campaigning can be costly.

“The time commitment required of councillors, including the time away from home, can be difficult for women already juggling the demands of family and work, particularly single mothers like myself,” she said.

This year, with COVID-19, women are bearing even more of the financial burden and caring responsibilities, making it more difficult.

“But being a councillor is an extremely rewarding opportunity to serve the local community.

“I urge more women to consider using their unique skills and knowledge to help make a real difference to their local areas,” she said.

The Victorian Government has provided $137,000 to promote pathways for a more diverse range of candidates standing for local government in 2020.

This has included backing the Victorian Local Governance Association’s Your Community, Country and Council campaign to Aboriginal communities.

Minister Leane has also announced the launch of a new Gender Equality Advisory Panel which will focus on achieving the 50 per cent representation target set by Victoria’s gender equality strategy Safe and Strong and delivering the reforms of the state’s new Gender Equality Act 2020.

The panel will include members from across the sector including LGPro and councillor representatives.

Mr Leane said the new Gender Equality Advisory Panel will be “full of experience and know-how”.

“It’s an important step towards achieving gender equity in councils by 2025 and one that will inspire a new generation of councillors,” he said.

The Local Government Act 2020 also promotes gender diversity with stronger action on sexual harassment and rules for councils to measure gender equality, diversity and inclusiveness in their workforce plans.

The nomination period for the 2020 Municipal Elections is from September 17–22.

Anyone wishing to nominate for Council should visit their local council or VEC website:

Enrol to vote now to exercise your entitlement 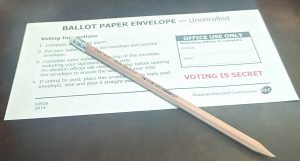 TIME IS running out to ensure you have your say at the upcoming municipal elections.

Election day is October 24 and the close of roll is 57 days prior.

The vote will be conducted as a postal election, with ballot packs being mailed to every enrolled voter in early October.

To vote in the council elections you must be enrolled by 4pm on Friday, August 28, 2020.

There are two categories of enrolment, either the State roll or the Council roll, called the “CEO’s list”.

The State Roll requires voters to be over 18 and an Australian citizen, the CEOs List is provided to give non-citizen ratepayers an entitlement to vote.

If you are an Australian citizen aged 18 years or over and you have lived in Victoria for at least one month, you will need to enrol with the Victorian Electoral Commission if you are not on the State electoral roll.

You can apply, check and amend your state enrolment details online at vec.vic.gov.au.

Voting is compulsory for State-enrolled electors at Council elections.

If you were on the last voters’ roll for your current municipality at the 2016 Council elections as a non-resident owner (and the circumstances of your enrolment have not changed), you may be automatically enrolled by council to vote at this year’s election.

You have an automatic entitlement as a council-enrolled voter if you:

You can apply to enrol if you:

Check with your local council to apply, check and amend your council enrolment details.

For local council elections in October 2020, it is not compulsory for council-enrolled voters to vote, except in Melbourne City Council.

The introduction of the Local Government Act 2020 will make it compulsory for all types of voters, including council-enrolled voters, to vote in all municipal elections scheduled from October 2024.