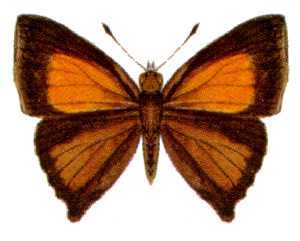 Derailed by the butterfly effect

WORKS ON THE Hurstbridge Rail Duplication project have been disrupted by the discovery of the Eltham Copper Butterfly in bushland near Montmorency station. Since the last confirmed sighting of the butterfly in January this year, works on the project have been diverted to avoid the butterfly habitat as experts engaged by the Level Crossing Removal Project have carried out further investigations, assessments and design work to avoid impacting the butterfly. In 1986, the Eltham Copper Butterfly (Paralucia pyrodiscus lucida), then thought to be extinct, was rediscovered in Eltham, and before this year, was not previously known to be in Montmorency. The butterfly habitat comprises a three-way relationship between the butterfly, a tree, and an ant. The life cycle of the butterfly includes an intimate and obligatory association with ants of the genus Notoncus and a dwarfed form of the shrub Bursaria spinosa (Sweet Bursaria). The butterflies have not been found in areas where Notoncus ant colonies do not occur. Adults lay their eggs on the roots of Bursaria spinosa. Once the eggs hatch, the caterpillars are guarded by the ants, which lead them to and from the ant colony to browse on the Sweet Bursaria leaves. In return, the ants feed on sugar secretions which are exuded from the caterpillars’ bodies. Vicki Ward, Member for Eltham said Labor has a long history of protecting the butterfly over many decades. “I’m proud and happy we’ve been able to work alongside our engineers to continue that record,” she said. As the Diary reported in the lead up to the 2018 election, the Andrews Government made the commitment that the works
“would allow trains to run every six and a half minutes at Greensborough, every 10 minutes at Eltham and Montmorency, and every 20 minutes at Hurstbridge, Diamond Creek and Wattle Glen, as well as two extra Hurstbridge express services, and would be completed by 2022”. To allow the project to continue duplicating the Hurstbridge line while protecting the endangered Eltham Copper Butterfly, which is listed as protected under the Commonwealth Environment and Biodiversity Conservation Act 1999, there will be changes to the original scope of the project and how the project will be delivered. The Level Crossing Removal Project (LXRP) claims it will still be able to deliver the election commitments, with adjustments to signalling to compensate for the 950 metres of line that will now not be duplicated. However, the revised outcomes do fall slightly short of the election commitments, as the project now promised trains will be able to run
“on average every 7 minutes from Greensborough, every 10 minutes from Montmorency and Eltham, and every 20 minutes from Diamond Creek, Wattle Glen and Hurstbridge, and will be delivered by the end of 2022”. Minister for Transport Infrastructure Jacinta Allan said:
“We have had to act quickly to ensure that we are both following the Commonwealth environmental legislation and can still get on with this vital project”. LXRP CEO Kevin Devlin assured the Diary the endangered Eltham Copper Butterfly will be protected during the works.
“We’ve avoided the Eltham Copper butterfly and its habitat won’t be impacted during construction,” he said. Mr Develin said they will continue to deliver the Hurstbridge line duplication,
“which will allow for more frequent and reliable services for passengers on the Hurstbridge line as well as new stations at Greensborough and Montmorency.” The discovery of the butterfly means there is almost 1km of track that will remain single track, however, Mr Develin said there is still
“approximately 2km of the rail line to be duplicated between Greensborough and Montmorency, and approximately 1.5km between Diamond Creek and Wattle Glen.” He said the bulk of the original scope of the project was located outside of the butterfly habitat and therefore will continue to be delivered under the revised design. The new sections of track, along with other infrastructure improvements, will facilitate the delivery of the planned service improvements for passengers. There will be two new stations at Greensborough and Montmorency which will feature greater weather protection, better and safer connections to the surrounding area and new car parking. Platform two at Diamond Creek Station is getting an upgrade and a new pedestrian connection will be built behind Diamond Valley College. Construction for the new design of the project is underway, and the butterfly habitat has been fenced off, with major construction set to start early next year and the project completed in late 2022. Sonja Terpstra, State Labor Member for the Eastern Metropolitan Region said she commended Vicki Ward MP, the Member for Eltham on her strong advocacy around the preservation and protection of the Eltham Copper Butterfly habitat.
“The Andrews Labor Government will continue to modernise and upgrade Montmorency station, whilst ensuring the rare Eltham Copper Butterfly, which has never before been seen in Montmorency, be protected whilst important rail upgrades take place. “I look forward to seeing the completed project at Montmorency Station as this rare butterfly flourishes in its new-found habitat near the station,” she said.