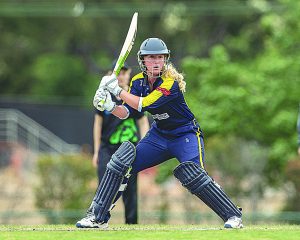 SOPHIE DAY’S cricketing journey has taken her from Warrandyte cricketer, talented Premier League all-rounder and now to a place among the game’s elite as a squad member of the Victorian Women’s Cricket team.

Day’s transition to state cricketer was confirmed on June 24 when Victoria released their 2020/2021 squad, and the former Warrandyte star will take her place at the state’s top level, after several good seasons for the Plenty Valley Cricket Club in the Victorian Premier Cricket competition.

Day will be linking up with multiple Australian superstars such as skipper Meg Lanning and Ellyse Perry in a talented Vic squad.

In recent Premier Cricket seasons, Day has cemented herself as a key batsman for the Plenty Valley Bats with 1,070 runs in four seasons but her talents as a spin bowler yielded 42 wickets at an average of 24, confirming her status as reliable all-rounder.

Before her time in Premier Cricket, Day, the daughter of Warrandyte Cricket Club legend Cameron Day, took the field for the club on numerous occasions, from Under 16s through to the clubs 3rd XI.

Day is one of five new signings for the Victorian squad and with no word yet from Cricket Victoria on whether the start of the WNCL will be affected by Coronavirus, she is expected to begin training shortly in preparation.