Connecting with our artists in a disconnected world

THE ARTISTS of the Nillumbik Artist Open Studios program are taking their studios online.

The artists originally planned to open their studio doors for the weekend of May 2 – 3, but due to the restrictions around COVID-19, the artists will be displaying their works in a special online space.

The online store is open now with a small selection of works, but will be expanded over the coming weeks.

“We initially thought we could postpone and then we thought, no it has to be a cancellation, because everyone is saying this will go on for months”.

Program Coordinator and potter, Annette Nobe said going online is something that many organisations have been embracing.

“I have worked in the IT industry in the past, and many businesses will be able to survive with the use of digital platforms,” she said.

In light of the recent success of the Artists Open Studios weekends, Bend of Islands artist Tim Read said the cancellation of the studio openings was inescapable.

“Unfortunately, [the open weekend] is the ideal way for the disease to spread, so [the cancellation] is a good move.”

All of the participating artists will be initially submitting three works to the online site, with works available for pickup or delivery from studios. 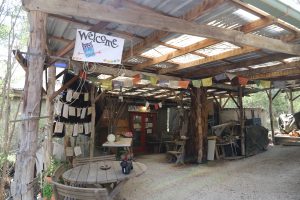 The website will also incorporate video messages from the artists and a virtual look inside some of the studios.

The program is also cancelling many of the workshops and classes that are normally run by the artists, and most artists have cancelled their private art classes as well.

However, many of the artists say they will be able to use their time in isolation effectively.

Artist Linda MacAuley said her classes being cancelled has allowed for a creative space to open up.

“It gives you space to do whatever you like — it opens you up to other opportunities,” Linda said.

Glass Artist Jacquie Hacansson said that she is enjoying the time in self-isolation in her studio, and has already started to be very prolific.

“It is wonderful to be able to sit and create without interruption from the outside world,” she said.

Metal artist Mel Rayski-Mati said that the Artist Open Studios program has allowed for many collaborations between artists and doesn’t see this changing under the current restrictions.

There are many wonderful works on display on the Nillumbik Artist Open Studios website, and there is likely to be a large outpouring of new works from artists when isolation is lifted.

This will ensure November’s Artist Open Studios will be bigger and better than ever.