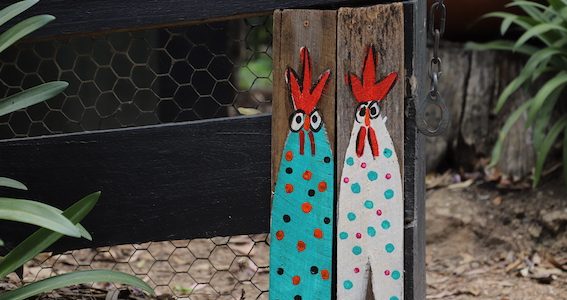 FOR THE LAST six months, Eltham local, Joan Denison has been using her passion for art to spread joy throughout her community, creating Iso Chook paintings on old fence palings.
WD Bulletin previously featured Joan and her quirky cartoon-like chooks at the beginning of her Iso Chook journey in our September 2020 issue.
Since then, demand for her Iso Chooks has grown and her paling paintings are now proudly on display through Eltham and surrounding communities.
Joan’s love for illustration began when she studied fashion design at RMIT, and later had a long career working for fashion houses.
Joan now frequents groups such as the Nillumbik U3A, who usually gather and paint together weekly.

“I’ve always been painting and drawing,” she says.

Joan was saddened to see her neighbours’ spirits dampened during the trialling times of the pandemic, so to spread a bit of joy, she painted a small group of chickens for her garden, so onlookers could have a smile.

“We noticed that people were stopping and taking photos of them, and so we painted some more.
“We put a sign outside our house and people started helping themselves,” Joan told WD Bulletin.

Joan and her husband had set up a stall every Saturday to give away free chook palings to the community, which received a fantastic response from families, especially those with small children.

“The line was all the way down the hill!” says Joan.

Enthused about the chooks taking Eltham gardens by storm, Joan’s neighbours and community members offered her free fencing to continue her crazy chook journey and during one of the most testing times for Victorian’s in recent history, Joan’s chooks became a symbol of hope and community cohesiveness.

“In the one hour we were allowed out for exercise, my husband and I went around putting chooks in peoples’ letter boxes just to surprise them — like Father Christmas!” Joan laughs.

To date, Joan has painted over 1,000 Iso Chooks and with demand still out there, she is showing no sign of stopping and is now taking commissions from community organisations.

“I’ve given to lots of hospitals, nursing homes, and five schools.
“It’s been a very interesting journey I tell you — it takes a lot of work,” she says.
“I’ve slowed down a bit, since Christmas.
“People are a lot busier now, we’re not seeing many people walking past our house anymore,” she says.

In decades to come, many will look back on 2020 and only see crisis, but for residents of Eltham, they will remember hope, joy and a connected community, symbolised by Joan’s Iso Chooks.