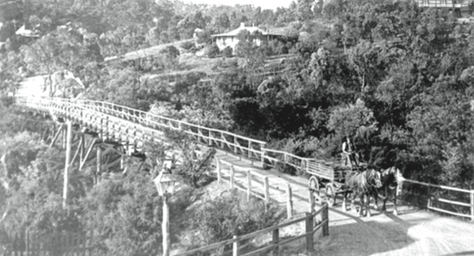 SHOULD we be careful what we wish for? The Manningham Leader carried a story last month under the heading One Bridge Not Enough saying hundreds of “squeaky wheels” were “demanding VicRoads build a second crossing of the Yarra River in Warrandyte”.

The impetus behind this demand is a petition launched by local resident, Jan Freeman, which is receiving much attention on social media. Long traffic queues at peak times and concern about outcomes in the event of a major bushfire have fuelled support for the petition.

Historically, the problem has arisen because Warrandyte has one of only three bridges that span the Yarra River in the north east of Melbourne. The others are Fitzsimons Lane at Templestowe (also very busy at peak times) and Vasey Houghton Bridge at Yarra Glen. With population growth and greater vehicle numbers, traffic through the township has increased over the years leading to the long queues at peak times.

This severely impacts Warrandyte residents, particularly those who live north of the river, in both the morning and afternoon peak periods and there is naturally a desire to see improvements. But more bridges mean more roads, a wider bridge means widened roads and, no matter what, better traffic conditions leads to more, not less, traffic as improved travel times attract more drivers from other congested routes.

There is anecdotal evidence that the failure so far to link the Metropolitan Ring Road to the Eastern Freeway and Eastlink has led to traffic finding alternative routes and river crossings through the north-eastern suburbs. Despite calls to complete the so-called “missing link”, through the Banyule Flats and Yarra River area which would entail another river bridge, no action appears forthcoming.

That is despite calls as recently as April this year when the RACV identified the “missing link’’ as its No.1 priority and called on the state government to fund it. However, the Banyule plan is actively opposed by local groups seeking to protect their area’s environmental values.

There is no doubt that Warrandyte’s topography, environmental sensitivity and history also presents many challenges for road and traffic planners seeking to improve traffic flow and the river crossing. The question must be asked, how much is the Warrandyte community prepared to compromise to achieve a better traffic outcome at peak periods?

Many solutions have been suggested in the past, ranging from a proposed Yarra Street widening and realignment in the 1980s (vehemently opposed by the com- munity) to a bridge from Bradleys Lane to Everard Drive more recently (discounted by authorities). Dick Davies, president of the Warrandyte Community Association (WCA), said recently that up until now everybody had a solution to Warrandyte’s traffic problems but nobody had data, so a VicRoads traffic report on the bridge road network, due in August, will be most welcome and should assist in identifying problems and solutions.

In addition, $140,000 has been budgeted to investigate ways to improve the bridge’s traffic capacity during an emergency, including widening and strengthening the bridge. An emergency situation is the greatest impetus for change. The current bridge has served our community well for nearly 60 years. No doubt the community will wish to be involved in any plans for change in order to protect the amenity and historical connections particularly if change leads to modifications to Yarra Street or the historic streetscape.

To return to the original question – do we need to be careful what we wish for?

While much attention has been focused on the bridge do we want to see it vastly altered, especially if it leads to major road changes as a result?

While much attention has been focused on the traffic line in Yarra Street at peak periods which so infuriates motorists, what changes can we hope for given this type of congestion happens at most major river crossings (even those on major arterial roads such as Fitzsimons Lane or Banksia Street)?

Can we accept that traffic congestion has the effect of deterring some traffic and that increasing capacity will attract more, not less, traffic as has been experienced elsewhere? Should we be more focused on the broader area solutions such as the Northern Arterial extension from Reynolds Road to the Maroondah Highway?

One thing is for sure – the debate, petitions and lobbying will persist as long as the line of traffic continues to snake along the township’s roads.