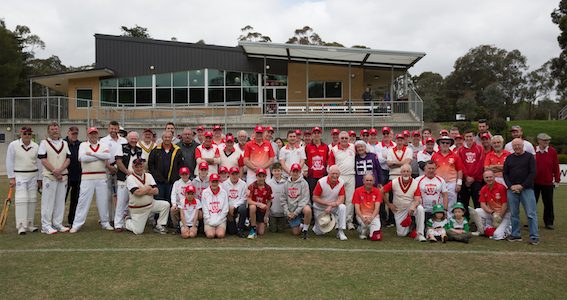 In 1977, Steve J Pascoe was appointed Warrandyte Cricket Club’s first ever Senior Coach.
42 years later, Pascoe walked out onto Warrandyte Reserve to a guard of honour as the club marked his 500th game.
OAM, coach, life member, president, premiership winner, leader, club legend and mentor are just some of the descriptors used when talking about Warrandyte Cricket Club royalty “Stevie P”.
After the ceremony, Pascoe professed his thanks to all in attendance but reserved special and emotional thanks for a fellow Warrandyte legend; wife and 42-year former 1st XI scorer, Ann.
With the formalities complete and a few misty eyes in the crowd, the game commenced and many watched on in contemplation of the career of such a revered character in local cricketing folk-lore.
On what it means to play 500 games, Pascoe jokingly told the Diary “It means I’ve been playing cricket a long time.”
And his secret for cricketing longevity? “Don’t stop.”
He admitted that the guard of honour came as a welcome surprise.
“It struck me as just another day of cricket so it was a bit of a surprise,” he said.
On reflection of his career, Steve admits it’s been the games propensity for positive development and bringing people together that’s often struck him as a highlight.
“It’s an important physical and social outlet and I’ve met a lot of good people with varying degrees of ability because there’s always a grade for everyone to get into and contribute.”
Pascoe is obviously aware of his.
“Winning premierships is always the pinnacle I suppose, but I also got more involved in the administration early on.
“I’ve probably done more off the field than on the field in-regards to administration.
“I just like things running well.”
Close friend and fellow premiership team-mate John Chapman was on hand to summarise Pascoe’s extensive on and off-field CV.
Pascoe’s cricketing career begins before his move to Warrandyte, his first walk to the crease began with Norwood and the Under 16s in 1963.
A 156-game campaign in purple yielded 4050 runs and 502 wickets.

His move to Warrandyte in 1977 was a turning point for the club.
With just three teams across the board, it fell to Steve to lead both Warrandyte’s top-flight side and the continued growth of the club.
He did just that, coaching the ‘Dyte to three 1st XI premierships and into the coveted Chandler Shield.
Flags in 1979/80, 1981/82 and another flag in 1983/84 marked a successful coaching tenure.
By the time he vacated the role, the club had grown to six Senior sides, six Junior sides, and a Womens’ side in the VWCA, which the club is striving to re-form.

Pascoe’s playing exploits were widely known and appreciated across the league; his competition batting award in 1979/80 was only beaten by the batting and bowling award double in the 1992/93 Chandler 2 season.
His club achievements include three-time 1st XI champion, three-time Senior club champion and seven-time batting award winner across the 1st, 2nd and 3rd XI, as well as five bowling awards.

His achievements on the pitch are rivalled only by his off-field contributions and passion for making the game a better one for all cricketers.
Over a combined period of 25 years he has served as Club President, Treasurer, Secretary and Chairman of Selectors.
If a role exists at the club it is likely Steve Pascoe has served in that capacity at one time or another.
He became a Club Legend in 1987 and a Life Member in 1990 for exceptional service both on and off the field, and exceptional service it has been.
Further recognition of his contribution to the club is seen every year at the Warrandyte Cricket Club Champion Award Night, renamed the Steve Pascoe Medal count in 2003.

Pascoe joined the RDCA committee in 1975 as Secretary.
He served for 11 years in the role before shifting into the Vice Presidency in 1988, again serving for 11 years until he was named President of the Association in 1999 – a position he held for six years.
When he finished up in 2005, RDCA Life Member Stuart Newey noted in the Annual of that year that Pascoe’s “strong conviction” was an important part in bringing about better playing conditions for all players.
“Steve has played a significant part in many reforms aimed at improving cricket playing conditions and the standard of cricket played in the RDCA.
“The position (President) requires a person of strong conviction to take the role… it is obvious that Steve is such a person.”

On the national and international stage

Pascoe was awarded an Order of Australia Medal in 2016, for exceptional service to the game of cricket.
His overseas endeavours have even seen him play cricket on all but two continents, in places such as Barcelona and Florence.
This includes a Crusaders tour of England where he met the Queen.

Nowadays, Steve continues to umpire high-grade cricket, a role for which he was awarded 2015-2016 RDCA Umpire’s Association Umpire of the Year.
His involvement with the club remains strong, being heavily involved in the In2Cricket program for young cricketers and continuing to impart his extensive knowledge, along with Ann, who both recently held club masterclasses in umpiring and scoring.
And of course, he’s still playing Over 60s cricket with his mates.
At Warrandyte, there is not a lot Steve Pascoe has not done over the course of his 500 games.
Universally loved and revered by all, his laid-back persona carries an unmistakable gravitas to everyone that knows him.