Warrandyte’s Julie Quinton was awarded a Medal of the Order of Australia (OAM) for service to the community on Australia Day.

The OAM is the pre-eminent way Australians recognise the achievement and service of their fellow citizens.

Julie’s service to the community includes her role as President of the Warrandyte Business Association and her membership on the Be Ready Warrandyte Committee where she works alongside businesses, assisting them with a fire plan for staff safety.

Julie is also an inaugural member of the organising committee for the Country Fire Authority of Victoria’s Warrandyte Fireball.

“In 2014, when Warrandyte was under fire threat, it dawned on me that we, as a community, should take the responsibility of fund raising,” said Julie.

The Medal of the Order of Australia is awarded for service worthy of particular recognition.

“I feel very humbled, and a bit undeserving.

“I’m very thankful for whoever nominated me, and to my family.

“When I first received notification of the award nomination I was hesitant to accept it.

“I felt a bit uncomfortable and almost declined the award, there are more deserving people than me.

“Then, as I reflected, my thoughts took me to my granddaughters, and that one day they will be proud of me.”

Appointments to the Order of Australia recognise outstanding achievement and service.

Acting Minister for Women (Victoria) Jenny Mikakos states: “Victorian women contribute equally to the success of our state and it’s important that we nominate them to be recognised for their service and dedication.”

The Warrandyte Riverside Market has been awarded the 2018 Manningham Australia Day Perpetual Trophy.

The award was presented to the organising committee by Federal Member for Menzies, Kevin Andrews in a ceremony at the Manningham Civic Centre on January 26.

The City of Manningham delegated the task of selecting a group or individual/s, which demonstrate character traits worthy of such an award to the Manningham Promoting Character Committee.

President of the Market Committee, Geoff Taylor told the Diary that receiving the award was “wonderful” and that it was “recognition of what a community group can achieve once they put their minds to it”.

When the previous administration informed the Council that they wouldn’t be continuing into 2016, Manningham Council put a call out for someone to take over, and a coalition of community groups formed to take on the role.

“It was a priority to us that the market continues, so that is why we put our hands up and volunteered to the council to step in and continue the thirty-year tradition.

“We had to try to make a transition from the former administration to the new administration in just over a month, which we were able to do,” said Geoff.

Geoff said he sees the market as a focal point for the community.

Bambi Gordon adds that the market is also a popular venue with stallholders.

“We get a small number of newbies every market — because regulars can’t necessarily do every one of them — but we have had over 900 applications to run a market stall in 2017,” she said.

Greg Rowell agrees: “The market is so popular at the moment, it is 75% sold out for this year, and it will be totally sold out by the time the first market is held on February 3”.

“We look at the retail mix, so that when people cancel we look at what you have got as far as applications for someone you think is going to add to the variety, not be a competitor to someone who regularly comes and sells, but also the sorts of small businesses and market stalls that are likely to attract new customers,” Bambi said.

The market has had to instigate an online booking program to control numbers, which has been necessary since Parks Victoria restricted access to some areas of the reserve to reduce impact on the vegetation.

“Part of having it pre-booked is about protecting the environment as well, because they are allocated a site number, they don’t just turn up on the day, if they are not on the list at the top of Stiggants they don’t get to bring their car in, so we don’t have those issues of people just driving through and parking where they like,” Bambi said.

President of the WCA and Market Committee member, Dick Davies told the Diary that the market has seen a large amount of money go back into the community.

“People apply for grants, and each of the members of the committee receives a portion towards their organisation — Lions, Rotary, Community Association, Community Church, CFA and people apply for grants either as individuals or it could be for something like building a cubby house or a community garden at the kindergarten — so they will give a specific project for it to go to — so it all goes back to the community,” explained Bambi.

Bambi said that the award is not just for the organising committee, but everyone who has helped the market become such an integral part of the Warrandyte community.

“The sheer number of volunteer hours that go into this, to have those volunteers who are down here at 4am in the middle of winter in the dark — and there has been so many of them over the thirty years — they really deserve this award and more,” she said. 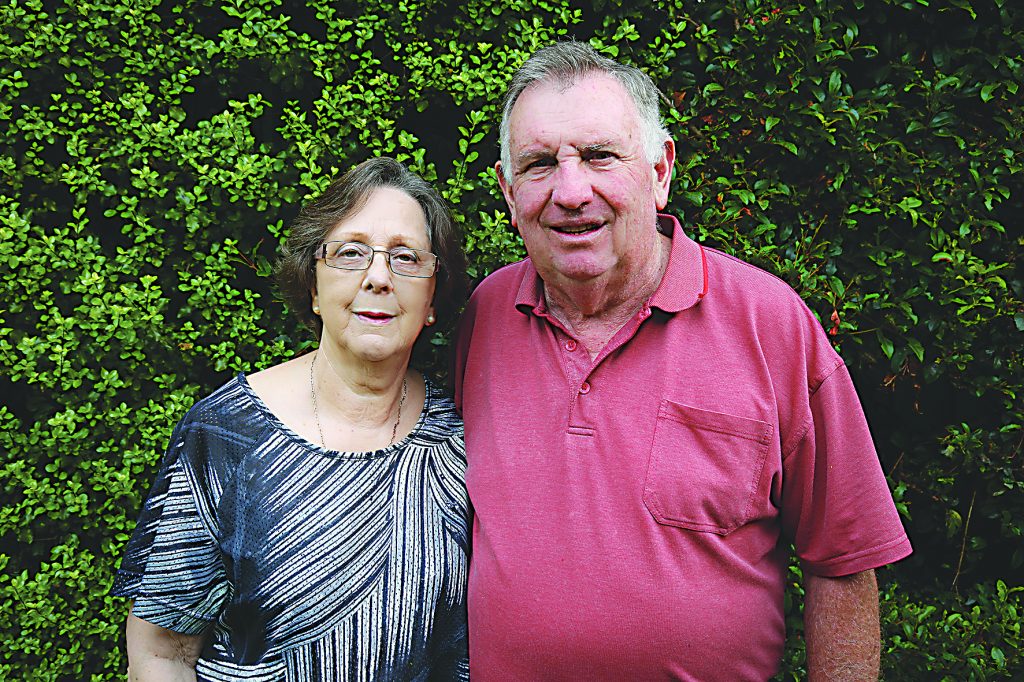 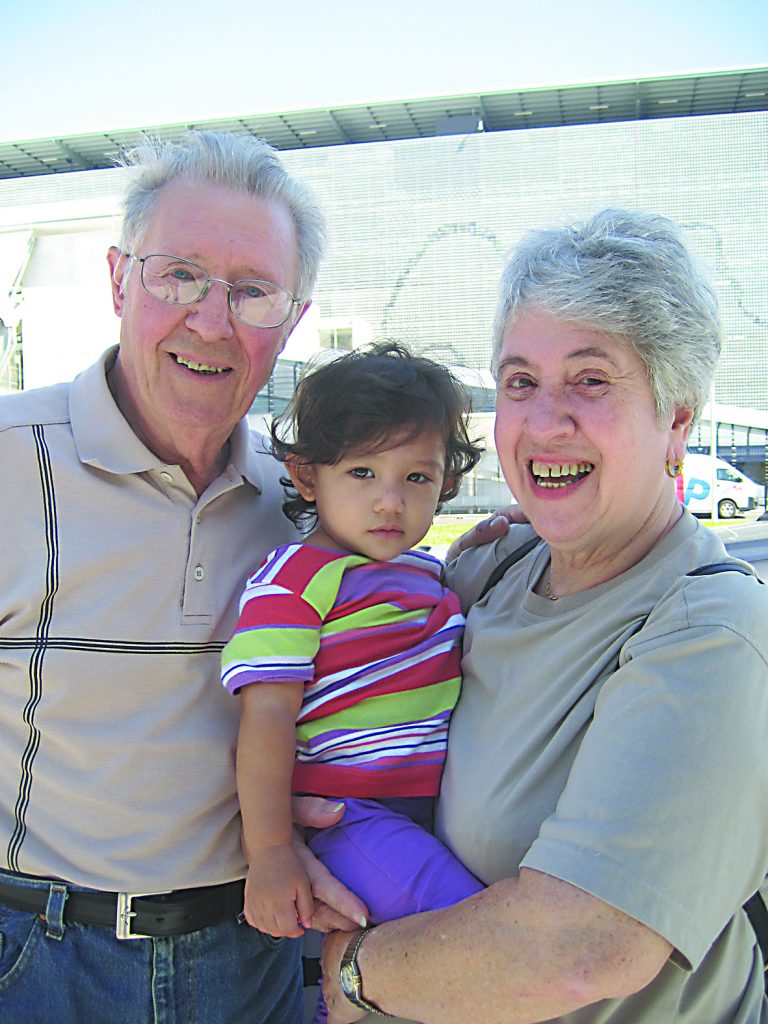 Two Warrandyte couples were recognised for their contributions to the community as Kevin Andrews presented this year’s Menzies Community Australia Day Awards.

Alf and Carole Adins have been recognised for their service to Meals on Wheels, where they have volunteered for over seven years, a task which Carole says she finds rewarding.

“We enjoy it, we have made lots of friends and it gives pleasure to the people who we call on, some of them don’t see anyone else for days, except for us who deliver meals, so Alf drives, and I go in and chat with them and we go through the fridges of some of them to make sure things aren’t out of date,” she said.

Mrs Adins says she has made friends with several of her former clients and takes time to continue to catch up with them even though she has changed rounds.

“We visit still and they come over for lunch and at Christmas and they are great friends, I tend to get involved with the people, sometimes too much!” she said.

Although she admits the role can be quite challenging at times.

“We have seen people slip into dementia, it’s sometimes quite emotional, and it makes you aware of your own mortality.”

The pair have also been acknowledged for their work selling poppies, badges and bears for the Doncaster RSL and Legacy Widows Clubs.

Closer to home, Alf and Carole have both been panel members for the Melbourne Hill Road Drainage Scheme as well as members of the committee objecting to the mobile phone tower at the Warrandyte Recreation Reserve.

Cynthia and Gerry Kearney were honoured for their volunteer work with Doncare.

Mrs Kearney volunteers at the Op Shop as well as holding a voluntary position on the Op Shop committee as Treasurer.

Mr Kearney is part of Doncare’s depot crew, where his commendation noted that “he has lifted furniture, sorted through mountains of rubbish and championed metal recycling like no other”.

Gerry makes his way around Doncare’s six Op Shops collecting weird and wonderful donated items to take back to the storing facility for sorting.

“We pick up furniture and electrical goods that need to go back to the depot for testing and tagging and also we collect various metals which we sort and sell for scrap metal,” he said.

“Because you are helping the community, the money we raise at the Op Shop goes back into community projects, and you are meeting people, you feel like you are doing something important,” she said. Gerry said he felt honoured to be receiving the award.

“To receive an award for something you enjoy doing is the icing on the cake, but we feel there are many people in Doncare that are a lot more worthy than us,” he said.

“There are so many people who work so hard to be nominated, we do feel humble,” said Cynthia.

To receive an Australia Day award is particularly special to Alf Adins. “It was the day I arrived in Australia in 1962,” he told the Diary.

“He came to Australia as a £10 Pom,” continued Carole, “Australia Day to us is important, it is a day where we celebrate being Australian, regardless of race or colour or where you came from, for us it is a day to celebrate Australia”.