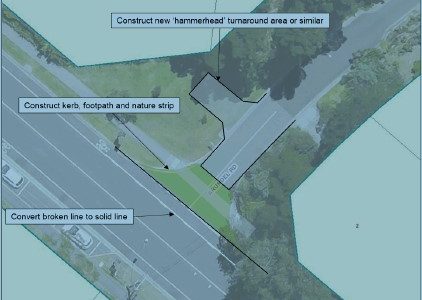 RESIDENTS OF Arundel Road in Park Orchards have applied to Council to have their road closed to through traffic.
At the May 25 Manningham Council meeting, Council supported, in principle, the permanent closure of Arundel Road (west) to through traffic at the intersection of Park Road.
A petition from residents was tabled at the meeting, where Council then heard that traffic volumes have increased during the Knees Road roadworks, as motorists look to avoid congestion linked to the works.
Extensive traffic management devices were installed along the section of road when constructed in the 1990s, however residents are still experiencing traffic concerns and dangers.
Residents of Arundel Road have raised extensive concerns and objections to the construction of a roundabout at the intersection of Knees Road and Arundel Road and are extremely concerned about Arundel Road being increasingly and dangerously used as a rat-run; particularly by school parents and residents avoiding traffic congestion.
Council officers held an on-site meeting with residents prior to the council meeting.
Residents at the street-meeting requested the permanent closure of Arundel Road at Park Road, indicating that the closure of the road would prevent through traffic using this section of Arundel Road making it safer for pedestrians to walk along the road pavement.
Several reported near misses and three accidents of children being hit by cars rushing along Arundel Road have occurred.
In the most recent incident in April, a child was struck on his bike at the intersection of Park Road and Arundel Road by a driver using Arundel Road as a cut through.
Residents told council officers that the street is too narrow and has chicanes and speed humps to deter this traffic — this is unfortunately not enough of a deterrent.
Residents have noted parents running late for school drop off/pick up rush at dangerous speeds down Arundel Road and residents believe the new roundabout at Arundel Road will only compound this issue.
The street was originally a private road and was set up and built accordingly, as well as originally designed as a “no through road”.
Other mitigation and pedestrian safety measures were considered, including the construction of a footpath along one side of Arundel Road.
Residents said they rejected this idea as they did not wish to change the streetscape or impact existing vegetation.
Cr Carli Lange has been advocating for the residents of Arundel Road, she told the Diary: “The residents are asking for the opportunity to provide a delegation to represent the street in the consultation process and have strong support in the street for this Road Closure solution”.
The road closure would include a turnabout area, to facilitate large vehicle movements, such as waste collection vehicles.
The implementation of the road closure is still contingent on a report being obtained from the Department of Transport and agreement from emergency services agencies.